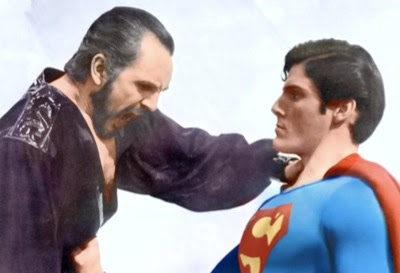 "Comics' original sin echoes over the course of its history. It rips to the surface in a variety of nasty ways to which old men, widows and children mournfully testify. It spawns a thousand and one grinning doppelgangers carrying a bag of the oldest tricks. It rains abuse on a creative class that at times bristles, at times is grimly accepting, and at times gives birth to one or two poor, depraved souls that will fight for the imagined rightness of someone else, many someone elses, to benefit from an inspired act of creation ahead of that creator. What happened to Jerry Siegel and Joe Shuster isn't history, not in the way history is usually defined. It is close, and it is awful, and it can't help but make you just a little bit sad."

The quote reminds me of that scene in the New Frontier animated movie where the artist at his table finishes his book about man's inhumanity to man and then blows his brains out. When I first watched that, I immediately read it as a reference to the angst many of these comic creators went through -- and read the artist at his drawing table as being a comic book artist. In fact, it seemed so obvious and stark a reference that it really really shocked me.

However, I will go one step further and say that I think this type of exploitation and frustration is everywhere in this society -- school teachers experience it, TV writers experience it, store clerks experience it. I think there is a fundamental mechanism built in some human beings -- or maybe it's in all of us, and it's only "active" in some -- that leads them to take from others without producing and exploit the weak.

In the Comics Reporter piece, the way Siegel/Shuster was treated by DC is referred to as the industry's original sin. That may be true, but it's just part of a far far earlier state of affairs. It's only the fact that superhero books like Superman are supposed to be about "Truth, Justice, and The American Way" that makes the story so remarkable, and so ironic.
Posted by Verge at 9:45 AM