Granted, this is a 1979 copy of Playgirl, but it just gave me pause.

Theoretically, Playgirl Magazine is the companion to Playboy -- a magazine with nude pinups of men for women to gawk at.

Now, look at this cover: 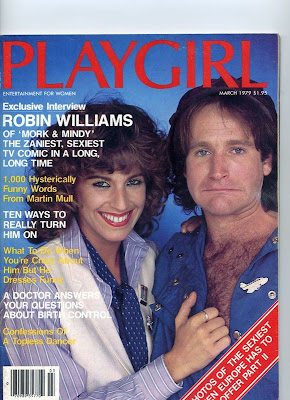 Let me point out:

* Picture of Mork making goofy face on cover. With a "fake" Mindy -- a "Mary Sue Mindy," to be sure. The Mindy that could be YOU.

* "What To Do When You're Crazy About Him But He Dresses Funny" -- like, for example, you are dating Mork.

And there IS the little red banner down the right corner touting sexy European men.

And...I will admit...I did experience a gentle moment of excitement at the sight of the Faux Mindy pawing at hairy Robin Williams' naked chest.

Anyway, here is an example of Playboy from the same year: 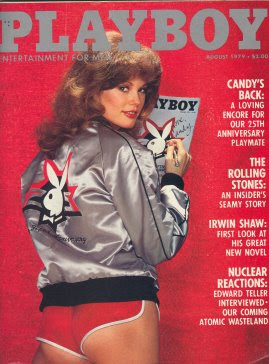 The old debate: do women enjoy their erotica the same way that men do?

Could there ever be a counterpart to "Hooters" that caters to women, for instance?

And could a comic only featuring cheesecake men appeal to female readers in the same way Witchblade appeals to male readers?