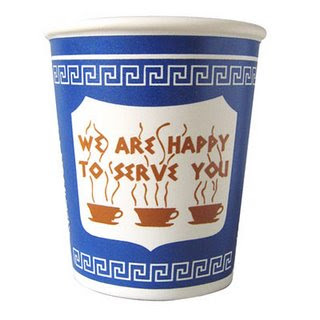 I need to write this down before I forget it.

I went out to buy some breakfast close to the house. Should have traveled farther, got a really good meal, but I had a lot to do and I just wanted to get it over with.

Went to the deli. This is an old old deli, that's been around since I was an infant. In a patchwork neighborhood filled with stores that open and close every other month, and several outright abandoned storefronts, the deli is a rarity. But it looks its age -- and worse, it has shared its long history in this sad area with my own. It knows too much: remembering the generations, my family's growth and implosion, my modest string of ex-boyfriends and roommates, everything. How to make a clean break of it? Certainly not at the deli.

When I walk into this deli, I feel as if I will never leave this neighborhood, as if the same preservative formula keeping it standing will continue to glue me in place.

The guy at the counter is ill with a degenerative disease, and I feel terrible as he struggles to put my $1.50 egg sandwich, container of orange juice, and cup of coffee in the brown paper bag. I feel terrible for him but I don't want to pity him; I'll be honest, I just don't know how to act. The other guy, he says "hello how you're doing" to me in the same rote way he has done for more than a decade, without looking at me, more a statement than a question. He's ill too, but not as bad as the first guy. And then there's yet another guy there, very old -- he's ill too, with big dark spots all over his skin. There was another guy used to work there, he died.

So anyway, I'm almost done at the place, this woman comes in and asks if they carry watermelons. Obviously, I think, she is new to the neighborhood. The closest thing to fresh fruit this deli carries are pickles.

When the lady leaves, the "hello how are you doing" guy scowls and says derisively, "Ha! Do we carry watermelons?!" And then he steps out to get some change for the store.

The first guy can't control his anger, his face bent in disgust. Now, I never seen this guy look angry before, so this is a shock to me. But he's furious, shaking, muttering, "Got no respect for people -- he's like an animal! You know? No respect! No wonder one day he'll be out on his ass!"

I scrambled to pick up my brown paper bag bursting with its contents (purchased for only $3.58). The man insisted, "you need a plastic bag? I'll go get you a plastic bag!"

The poor man was clearly in agony packing the brown bag alone. I was fine. But it wasn't even that.

I thought about the elevators back at the apartment, both of them, rattling and in sore need of repair. I knew the landlord would wait until somebody got hurt in them again. I just knew it.
Posted by Verge at 12:04 PM