Bigfoot Body Found, and a question... 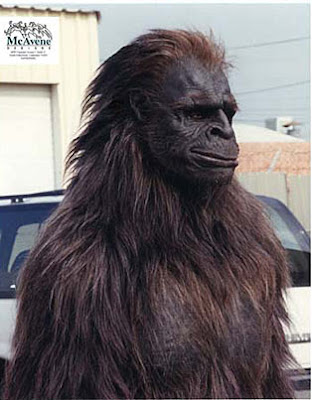 So apparently this dude found the dead body of a genuine Bigfoot and is now keeping it in a freezer in lieu of its grand unveiling in September. I shit you not. Or maybe I do...we'll see in September.

If this was really the body of a genuine Bigfoot, wouldn't the authorities or the military get involved?

You announce to the public: "I have the corpse of a 9-foot as-of-yet undiscovered lifeform in a freezer in my shed." The FBI doesn't get involved? Mulder doesn't get sent down to check it out?

And since the Bigfoot is humanoid, aren't there legal issues here about holding on to the body? Was it a homicide or a natural death? Shouldn't there be any inquest? Should there be a proper burial?

I'm very open-minded about these X-Files type things, but I have a hard time with Bigfoot. Because if there really are these large creatures living in pockets of the United States, where are the bones? Wouldn't there be more dead bodies found?

And if the creatures are so advanced that they know how to stay away from humans and to assiduously bury their dead as to not be discovered -- what business does anybody have keeping their corpses in one of those portable freezer containers?
Posted by Verge at 10:52 AM