Some X-Men To "Come Out Of Closet?" 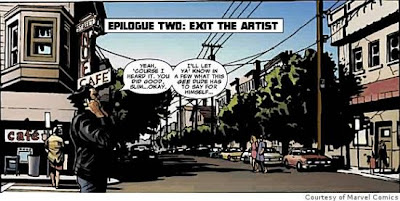 In an interview with the San Francisco Chronicle, Marvel editor Axel Alonso hints that with series relocation to SF, some X-Men characters might be coming out of the closet...

Q: Is there a chance we might see one of the X-Men come out?

A: Yes. Yes. The city being what it is, certain characters whose sexuality might have been ambiguous are going to feel free to be who they are. I will qualify and say that I never go into the situation with a mandate or an agenda. It has to come along naturally. We're not going to rush into it. But I see it happening.

I fully support this. With such a large extended cast as in the X-Books, it would be only natural that some team members and supporting characters would be gay. It's like with The Avengers. Or the Justice League Of America.

The question is, what X-Men (X-Women) are we talking about here?

Me, I always liked the storyline where Northstar had a crush on Iceman and there was the possibility (and maybe I'm wrong and read too much into it) that maybe Bobby Drake had some sort of conflicted feelings back for the Canadian superhero. 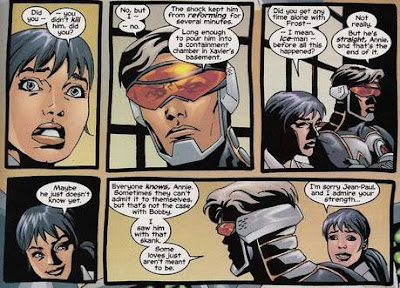 Did Northstar just call some woman "a skank?"

But what would be really awesome is to have a gay character just have an open, non-emo relationship with someone. I mean, it's THE X-MEN, so a certain amount of emo is going to be there. But...you know what I mean. What Cyclops has with Emma Frost. When you read Cyke/Emma stories, you get the feeling they are boinking each other all the time. Or have it be more sweet, like Spidey/MJ.

Why can't you have homosexual characters have that freedom, without it being this self-hating frustrated longing thing where they are afraid to be who they are? They used to have those plotlines in old movies all the time, ending with the self-loathing gay (or "gay coded") character dying horribly or killing other people or more likely killing his- or herself.

Northstar is too hot to be pining over some guy he can't have. He's way smarter and savvy than that.

Anyway, I'm looking forward to the new storyline.
Posted by Verge at 11:06 AM

Email ThisBlogThis!Share to TwitterShare to FacebookShare to Pinterest
Labels: homosexuality in comics, x-men