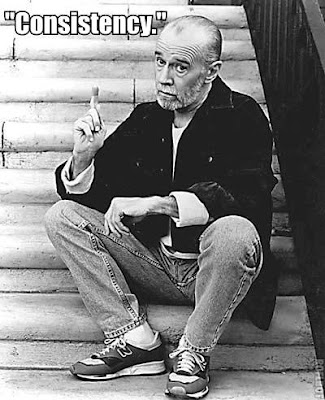 1. I'll respect the public crusades some people have against the "freaks and losers" when they crusade equally as publicly against those in power who fuck up in the same way.

3. When I used to hear a story about sexual harassment, I would automatically assume that the man was at fault, and that it was a black-and-white story. Knee-jerk reaction. And I would get mad -- furiously, furiously mad. I acted this way out of emotion, out of identification. And you know what? Sometimes, I was right. And sometimes? I was dead wrong. And sometimes it was just far more complicated than I had envisioned. But all that didn't matter. Because I just made a public statement to "hang this motherfucker and cut off his nuts." And if I was wrong -- or just didn't have the full picture -- I looked like a goddamn moron.

4. My insistence in shades-of-gray thinking in everything from feminism to the latest fandom obsession seems to really piss some people off. Good. I enjoy watching people with infantile ways of classifying reality roar and stew in their own self-righteous outrage. It's like candy for me, it's the fuel for my car. Keep pissing, keep moaning, keep crying, stay bitter, write screeds, invite friends, and keep viewing your truncated world as a realm of heroes and villains.

You know what? Even the comic book writers aren't seeing superhero stories as simply tales of heroes and villains anymore. Maybe some people should learn to grow the fuck up, throw open the door, and crack open their minds. Or, if they insist on being dogmatic and close-minded, at least stop making fun of the religious fundamentalists. In fact, you might just want to try one of their fine systems of theological thought. It might be even easier if you had a book to follow. Heaven, hell, good, bad, right, wrong. Black, white. Heroes and villains.
Posted by Verge at 7:48 AM