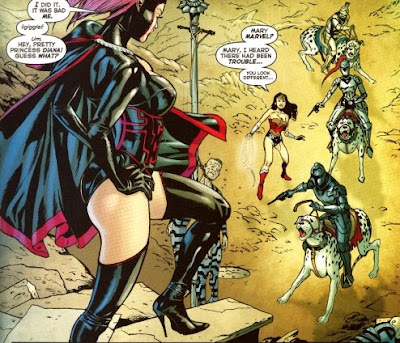 The fact that Grant Morrison or whomever would look at a character like Mary Marvel and decide that making her a pink-haired fetish queen (with stilted dialog that would seem at home with the second "Star Wars" trilogy) would be hilarious and ironic...that this is the best you can do with the character...

It's not the fact that she's turned evil that's the problem for me. Or that she was really good & now she's really bad.

But I'd like to see this with a female character where she's not automatically hyper-sexual as part of the bargain.

Take the "Dark Willow" storyline in Buffy The Vampire Slayer, for instance. 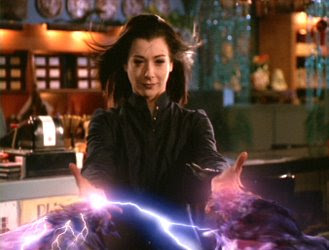 I know some of you might have your fetishes about grim women in loose-fitting black shirts and no makeup, but Dark Willow was not an overtly sexualized villainess.

Can't a female character be bloodcurdingly evil but not sexy? Can she express her evil in a way that doesn't mean really big breasts in a leather outfit? Or the need to seduce men?

Evil Mary Marvel doesn't need to wear sexy outfits. She could simply punch somebody's skull in. This was the same Mary Marvel who was sexually harassed in a "Supergirl" special and was pissed and wanted revenge. Would her evil side necessarily manifest as being a hottie with bigger boobs? That's all I'm asking.

Nothing against "sexy" or leather corsets. It's just an observation.

(Oh, and for those who want to defend the iconic integrity of Fetish Mary Marvel -- I'm totally with you. Defend away. Just please don't specifically request that I retract my statements because you're obviously right and Grant Morrison is a genius who never makes mistakes.)
Posted by Verge at 2:33 PM