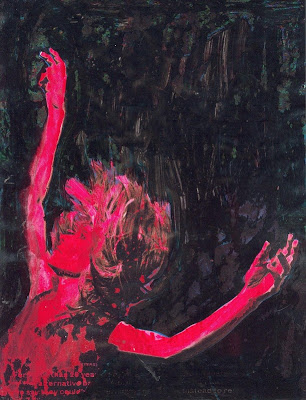 The following story is not for the squeamish. It might not be good breakfast reading, either.

I was watching a special the other night on "the psychology of Batman" or something like that. It went into detail on the key event that shaped young Bruce Wayne's life, and how it shaped him in a conscious and unconscious way, going down each layer and influencing how he decided to live his life. There was the event itself -- the murder of his parents -- and the details surrounding the event -- the Zorro movie, bats, etc.

Watching that program brought to mind the following memory from my childhood, one I both consciously and unconsciously recall every once in a while, in different ways. It's about something very terrible that happened not to me, but to someone I didn't even know.

One night when I was around eight years old I woke up to hear loud banging on the front door of our apartment. My mom answered the door, I heard some murmurs, and then the door closed again. I went back to sleep.

Later on that night, woken up by the sound of men who weren't my dad talking, I found two policemen talking to my mom by the front door. The policemen had pads out, and at least one was wearing gloves.

On my front door was lots and lots of smeared blood, and pooled blood soaked into our welcome mat.

So this is what happened:

A young woman who lived two doors down from us was attacked by her live-in boyfriend with a machete. Yes, a fucking machete: 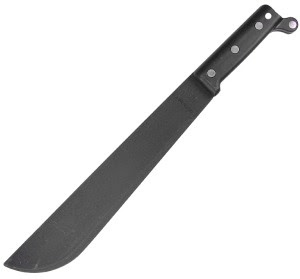 She was cut up all over the place, her hair soaked in blood, some of her scalp hanging off. In a panic, she ran to a number of neighbor's apartments, including that of my family, and banged on their doors to let her in. After this proved to be unsuccessful, she limped down to the next floor, to try those apartments. That's when another woman let her in, tried to calm her down, and called the police.

My mom explained to the police that she was just really frightened by the sight of this woman, didn't know what was going on, and feared for her kids. That's why she didn't let her in.

Now I must explain to you what my front door looked like. I'm not talking a little stain of blood, a hand print. I'm talking about Nightmare On Elm Street level blood. You know the scene where the blond chick is attacked by an invisible Freddy and is writhing on the ceiling? Remember how much bleeding? That's how much we are talking about. Even as a child, I marveled at the news that she was still alive, that a woman could bleed so much and not die.

As for the doormat, as I said, that was just soaked. And a trail of red footprints led from the mat to the head of the stairs leading to the next floor.

By this time my dad, who worked at night, had just come home. He started talking to the police, and my mom used the opportunity to grab some Ajax powder and sprinkle the blood with it, to disinfect it. She poured the powder on the mat, the door, and the door handle, and I remember that white stuff just sticking to the blood, getting soaked in it.

And by THIS time -- it was time for me and my little sister to go to school. So we got dressed and my mom helped us step over the bloody welcome mat to go to the elevator. And I distinctly remember stepping over that mat.

I played that night back in my mind for a long time afterwards. It was the first time I witnessed anything that I could label The Horror. So there was the visceral visual impact of it. But then there was the other impact, questions...

So this woman was bleeding to death, obviously in serious distress, and nobody on my floor opened the fucking door for her and let her in? Did anybody call 911?

The story went that this woman and her boyfriend were allegedly drug addicts -- and in a way, there was the insinuation that this was sort of "coming to her." That because of that lifestyle, this was going to happen sooner or later.

But when you have somebody half out of their mind in fear on your doorstep, all cut up, how do you make these judgments? This woman could die -- she could die on your fucking doorstep!

And I can make judgments on those who didn't help her -- but how can I make judgments on my mom? Weren't her fears legitimate? Finding a bloody woman at her front door in the middle of the night, with a crazy boyfriend still around with a machete? Three small children still asleep in the apartment, my dad still away at work?

But still, no matter how many times I turned the story around in my head, examined it from different angles -- it stuck with me, and it was messy. There were no comforting, clear answers. It stuck in the back of my subconscious, sphinx-like. I even felt guilty at times for it, about her, though there was obviously nothing I could have done at the time.

It plays back in my mind, this woman screaming, though I never really saw her -- but I see her in my mind, screaming for help, banging on doors, hysterical, the man she loved and trusted having just tried to kill her.

And while this story still stays with me, it was only until watching that special on Batman that I was persuaded to take a second look at art and writing I had made years ago and realize what my unconscious was trying to remind me: 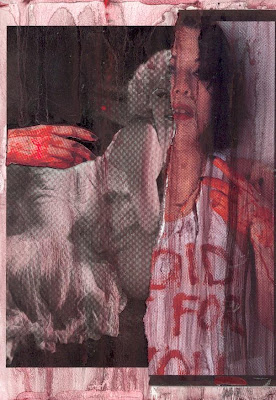