Rose From Doctor Who "Just A Needy Girlfriend?" 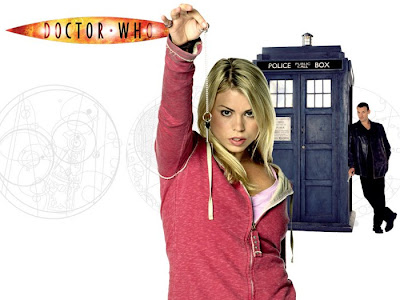 Steven Moffatt, the head writer of the current Doctor Who TV series, confirmed that spunky "Who" sidekick Rose will not return to the show.

Further, he referred to the popular character, who appeared in the first two seasons, as:

I think to refer to the character in this fashion sort of trivializes all she did on the show. At least with the spinoff "Sarah Jane Adventures" they put another former Who sidekick in a starring role.

I love the show, but the only problem I have with it is the concept of these female assistants. It often turns into "I like you babe, but Freebird and all that," and then Doctor Who sorta goes off.

And as much of an active role as characters like Rose or Martha have had on the show, they always seem sort of transitory. Look, I know we get different Doctors -- but how many "companions" has it been for this current show so far?

I mean...if I had my choice to play the Doctor or one of his companions, I'd put on the glasses and the Chucks in one second.

And I have Chucks. Well, not real ones. But good enough.
Posted by Verge at 12:49 PM

Email ThisBlogThis!Share to TwitterShare to FacebookShare to Pinterest
Labels: Doctor Who