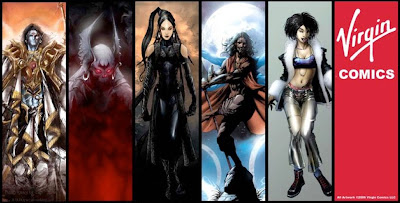 Journalista reacts to the death of Virgin Comics:

"The Direct Market caters primarily to a closed network of 25-35 year old men who’ve been reading Marvel and DC Comics for over a decade, and have next to no interest in buying anything that doesn’t cater to their narrow set of interests. You can occassionally snag a moderate number of readers by producing work that grabs them by the fanboy short-hairs — vampires, zombies and licensed versions of characters or creative works that they fondly remember from childhood are usually required — but anything else is slow death where money is concerned. Treat the Direct Market as though it were a healthy, diverse and dependable sales environment and you might as well be jumping off a cliff."

In general, Virgin Comics seemed like a high class operation with beautiful art and high-quality production (not to mention: big name celebrities!). But it didn't have men in tights. Ergo: the masses didn't buy them. Ergo: the line failed.

Is this true? If so, whose fault is it? The Big Two? The direct market? Are the fans just too close-minded?

Can there be a big comics publisher on the level of DC or Marvel who puts out non-superhero comics? Isn't Image like this, a little?

Will superheroes and comics be synonymous until the end of time?

Um...wasn't some of those Virgin Comics sorta superheroey anyway? Are the capes a must?

Was counting on the Direct Market audience to know who Deepak Chopra was, and be impressed that he was writing a comic book, too much a gamble?

Now where will Hugh Jackman write comic books?
Posted by Verge at 11:11 AM

Email ThisBlogThis!Share to TwitterShare to FacebookShare to Pinterest
Labels: RIP