Parents Who Don't Like Their Kids Reading Comic Books 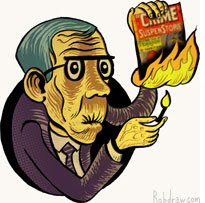 If you are lucky, when you were a kid you had parents or guardians who didn't completely hate the idea that you liked comic books.

My mother absolutely hated the idea that I collected comics. Not for the usual Wertham-esque reasons that comics would rot my brains or make me into a serial killer, but because they weren't feminine enough for me. She thought they would muck up my teenage socialization because they were a non-"gender appropriate" activity.

And to be terribly frank with you, she was right to an extent -- I got teased a bit in school for being a comics fan (this was the mid-80s, to give you some perspective). Now, how much of that teasing was for the simple geekery of being a fan and how much of it was for being a female collector? Who can say?

But I still would have liked support at home, regardless of my hobbies. Instead, my Mom engaged in a war against my comics, the crowning achievement of which was to tear the comics up in little postage-stamp-sized pieces and throw them in the air like party confetti.

A word to any parents out there who might be considering a similar tactic to rid their kids from habits they don't like: it doesn't work. It only imprints in their mind, at a time of their lives where they're just looking for something to rebel against anyhow, that it is heroic to "not give up the fight." You create stubborn children this way.

A friend of mine's father took things one step further. He took all of my friend's comics and burned them into ashes in an oven. My friend grew up to be a comic book hoarder.
Posted by Verge at 9:56 AM