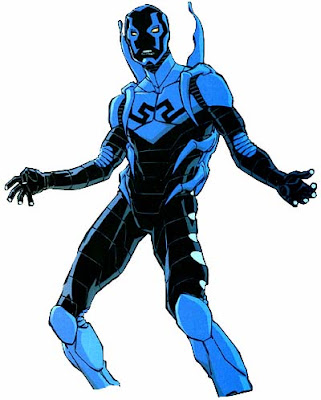 A Newsarama commenter complains about the Spanish-language issue of Blue Beetle:

"I thought it was the first ever comic that bordered on racism. DC: Now forcing its readers to read Spanish."

I know, DC -- you thought you were doing something right, sort of expanding your scope a bit. But in reality -- you are forcing your readers to read Spanish!


The fact is, Latinos are one of the fastest-growing populations in the United States. DC and Marvel both should be putting out some Spanish-language comics -- not just translations of their existing comics, but comics specifically for that growing population. And not just for that population -- but for the English-speaking young people who could use some early introduction to Spanish! If the Dora the Explorer people can do it and have tons of both Spanish-speaking and non-Spanish-speaking fans, surely comic companies can do it.

"Why am I a bigot? Because I want foreign people coming to an English speaking country to learn, I don’t know, ENGLISH???? I assume in your perfect world, everyone will speak Mexican and we’ll all be happy when illegal immigration causes the economy to collapse."

That said, I should point out that despite the overwhelming number of Newsarama commenters who "corrected" Dave, the sad fact is that there are probably a number of people grumbling under their breath about the book. They see this book written in Spanish and consider it threatening, a confirmation of all their xenophobic fears. The world is changing, and it frightens them to death. But this doesn't mean the comic book industry shouldn't change.

The problem for the longest time had been that people like that Newsarama commenter had some level of influence from within these comic companies -- they were afraid of change and social progress. They either blocked that change in their books or presented a lame version of it. Now that things have shifted, we need to keep moving forward and have progress. But, make no mistake -- you will see more angry fans crawl out of the woodwork and complain about it. There will be a backlash -- but it will be one with more bark than bite.

(Waiting for O'Reilly to hold up a copy of Blue Beetle #51 on his show and say: "DC is forcing America to read Spanish!")
Posted by Verge at 10:05 AM