Comic Shop Report: Stepping Out of The Comfort Zone 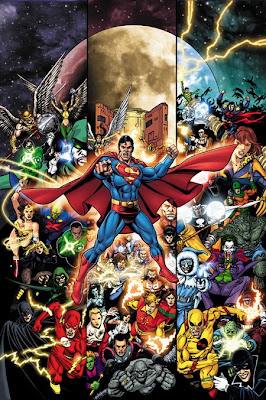 Before I discuss DC Universe #0, I think I'm going to back up and describe my comic shopping experience yesterday. It's not just a review, it's a whole scenario.

Wednesdays at a major urban comics retailer is, as you can imagine, a madhouse.

When I finally managed to squeeze my way into the new comics rack & pluck a copy of DC Universe #0, I realized that the corner was totally dinged. This began to bother me more and more as time wore on at the store, in the way that only a formerly hardcore comic book collector can relate to. The corner of my copy of Lucky #1 was also dinged. I swore I would find my way back into the new comics rack to replace those copies! (and I did!)

Giant-Size Avengers/Invaders sold out at my store. I took the last copy. I'm pretty sure most or all of that book was reprinted material. But it promised you a great story.

I knew nothing about Hercules #1 from Radical Comics (as I know almost nothing about Radical Comics), but it was only $1.00 for a book with a card-stock cover, prestige binding, and painted (or painterly) art. I decided to take a chance. It was a good marketing strategy on their part.

As the months go by, I find I hunger for more and more independent comics. I go through the back issue bins looking for interesting and/or self-published books that I might have missed. As my finances are tight, I demand more from my comics -- and what I demand is an unique experience & food for thought. I have no problem buying Chuck Taylor knockoffs at Payless and using the money saved to well-made comics that will enrich my life and make me think.

DC Universe #0 was an ad. It was an ad. The way it was promoted, I thought it was going to be some crucial piece of the Final Crisis pie. But it was a series of ads. DC Universe #0 was impenetrable to me. This does not mean the whole series will actually be so. But as somebody who is not steeped in the current lore of the last 5 years of DCU continuity, I had little to no idea what was going on. The only thing I could relate to was the Batman and Wonder Woman segments. Will I be able to enjoy those books if I wish not to follow the entire Final Crisis oeuvre?

I hear some people comment that DC Universe #0 should have just been a Free Comic Book Day offering. I disagree. It is not new-reader friendly. DC is much better off with Superman, Batman, or whatever.

DC and Marvel need to start trusting their overall lineups more and not depend on these humongous events. At least Marvel sort of works the events in a bit more organically. I don't want to read a series of books called "Final Crisis: Blah" and "Final Crisis: The Beginning Of The End of the Beginning." I just want to read Final Crisis. And then I want it to be over. I don't need a whole miniseries as an epilogue. I just want it to have a good run and be over. And then I want some sort of new status quo established that I can identify with and understand. Which brings me back to my point about limited resources & an increased need to buy books that inspire me. 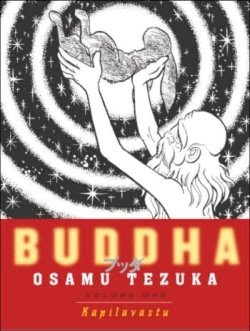 Currently, I'm reading Buddha by Osamu Tezuka. The series of books are put out by Vertical.

Buddha blows my mind. It is so great on so many levels. Life is short. I don't want to stuff my mind with the same old crap anymore. And yes, Buddha is a reprint of an older series -- but it's brilliant and lovely and unique and funny and powerful.

And you know why Giant Size Avengers/Invaders sold out? Because those older stories were good as well! They deliver.

DC Universe #0 brings to my mind the word "rut." I get into ruts sometimes. I think of the same types of things over and over; I try old methods that didn't work before, thinking that somehow magically they will work this time. My life becomes a routine, and even though I'm not completely happy with the routine, and my view is sort of limited, it's all I know. The familiar things, like Triscuits and beer while watching Family Guy, comfort me. And that's fine.

But life is short. I want more! I want to expand my mind. I want to sample the entire expanse that this medium has to offer me. I don't want to be comforted. I want to be uncomfortable. I want to grow.

Change will happen regardless. I am only forestalling it. I rather flow along with change. The mainstream comic book industry needs to do this too. And I think they are, with initiatives like Zuda and Soleil. But something like DC Universe #0 is like a comfort zone. It will have its fans and will generate money for the company. But it is not growing anything. At least Bendis makes people angry; I don't agree with everything he writes, but at least him and Millar write things that piss some people off and make them think. At least Civil War inspires some debate about current politics. I find the political metaphors in Secret Invasion a little chancy, but at least Bendis obviously has something to say.

But in the end, as I said before, Final Crisis will make money for DC.
Posted by Verge at 9:03 AM