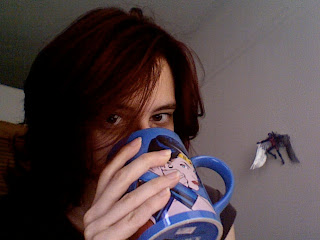 Good morning! My neck really hurts because I did the salon thing; they baked my hair for an hour, washed it like 10 times. Patient boyfriend waiting for TWO HOURS in the salon, thumbing through their fashion magazines, torture.

Patient boyfriend, after reading every women's magazine in the salon, inquires:

"How come there is such feminist uproar specifically over comic books when these magazines also show idealized, often skimpily-dressed women on a regular basis? I mean, any number of these blond models could be Ms. Marvel."

I, of course, was quick with an answer:

"Well, the purpose of cheesecake comics is the boobies, the purpose of Vogue and In Style is to make me feel like I'm not living up to an artifical standard thus propelling me to buy more stuff."

It's a good question, though. And of course I'm answering this as I'm paying through the nose to get my hair done.

This Week At The Comics Shop 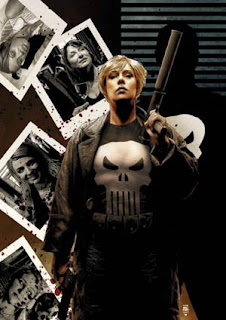 I didn't go to my usual comics shop yesterday so I'm sure I've overlooked some issues...

New Green Lantern Issue: nice, but there's no urgency there. Oh, Hal and Kyle/Parallax are going to mix it up! Wow, didn't see that coming! Oooh, will one of them die? No?

Alternate cover for Flash #13: It takes a lot of balls to put out "collector's covers" for a book of this quality.

Punisher #49: Here's a new one: breast cancer instead of rape for a female character's motivation. Bought this, haven't read it yet. Opened it up on the train, faced with naked woman w/one breast covered in blood shooting the face off another guy while everyone is naked and covered with blood. Punisher naked handcuffed to bed while said woman climbs on top of him and asks him to "f**k" her and then blows her own brains out. Yes, the streets are tough.

Countdown: Probably would help sales if Wizard wouldn't reveal everything that happens that day.

Deadpool/GLI: No, the present isn't safe for you, Squirrel Girl & Speedball. Dan Slott has to seriously think of a way to protect Squirrel Girl so she doesn't become the next Sue Dibny. Speedball, Sue, then possibly ripping Jimmy Olsen's intestines out through his nose -- no square character is safe!

Putting The New Gods Out Of Their Misery 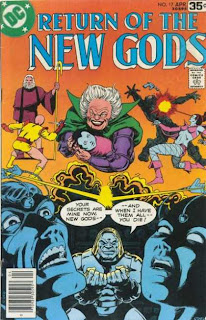 What happens to the quaint properties of yesteryear after several revivals have failed?

Well, you could hire Neil Gaiman and John Romita Jr. to do a mini-series.

Or you could ask Jim Starlin to kill them and reboot them all.

A Wildstorm "revival" of some of the New Gods characters was on the docket while I was still working at DC. One or two involved artists that would in theory take such a long time to finish an arc that conceivably there might even be a finished issue or two ready to roll.

These revivals seemed to me to be more like Morrison-esque reinterpretations rather than wholesale reboots. However, the gist I've gotten from Starlin's Newsarama interview is that there are going to be reboots.

I don't think inventing whole new character concepts based on the original New Gods names is in itself a bad idea. But based on several recent DC reboots I am a little skeptical.

I don't think we can really know what Zuda is about and if it is going to work or not until it actually gets launched. I'm reserving judgements until such time.

All the internet commentary on the subject brings up the larger issue of work-for-hire and creator rights.

Tom Spurgeon brought up the point that no matter how above-board DC is, no matter how "informed" the creators are about what they are getting themselves into, it is still ethically wrong to ask a creator to sign away their rights to an artistic work.

Another point-of-view would be that without the economic incentive of aquiring intellectual properties, there is no reason for a big company like DC or Marvel to waste their time. That to ask these publishers to allow creators to hold on to the rights is to ask them to do something out of an ethical, not business, motivation.

This brings me to something I noticed yesterday when I was getting my hair done.

The neighborhood was pretty posh, and most of the boutiques there were these overly-priced tourist traps that offer discount-quality clothing for inflated prices. There was only one boutique there that had decent prices. It was run by an affable, down-to-earth lady who believed in offering fair prices for quality goods. She was from California, a little bit of a hippie, and completely contrasted with the elegant but cold Euro-shops that dotted the block.

I bought a really good peacoat from that woman last fall for a great price.

She's gone now, replaced by another inflated-priced Euro-shop tourist trap. As I knew she would be when I bought that awesome coat.

It's a great coat.


Teh Internets, They Are Teh Dead

Man, between the Summer Vacation & the pre-San Diego Con festivities, the internet is *dead*!

I've got a big(ish) announcement at the beginning of next week. Just another chapter of my interesting life in comics -- be there! 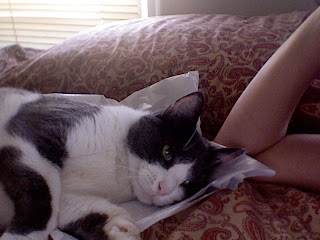 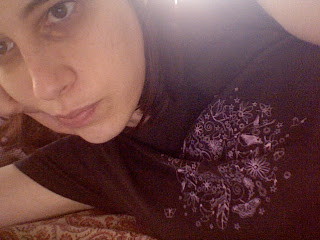