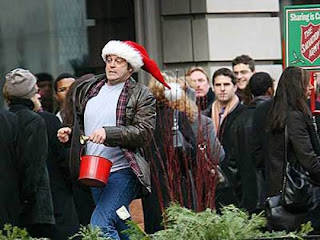 1. Watching Christmas trailers on the hottest day of the year? Depressing.

3. Paul Giamatti wouldn't have to star in this s**t if he was six-feet tall & looked like Brad Pitt. We all know this.

4. Co-starring Kevin Spacey as the Prince of Darkness, a.k.a. a corporate type who is going to steal Christmas. Why do these corporations put out these corporate, uninspired films that feature corporate types as the villains? It's a safety valve for the script writer laboring over the flick, so he won't flip out one day and drink lye.

5. This movie assumes that midgets & dwarfs in sunglasses dancing to hiphop are self-evidently funny.

7. Jen's dating somebody now, and I think he looks like Brad Pitt. It's not Paul Giamatti.