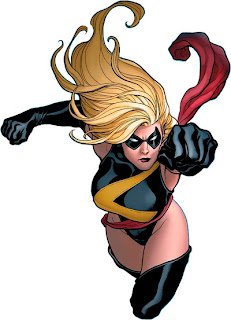 I was reading a blog/forum called P.O.W.E.R. In Comics Call To Action this weekend, and it made me think.

At first I had a knee-jerk reaction to one of their suggestions that readers should send to DC & Marvel a bra along with their letters of complaint as to how women are portrayed in their books.

But then I thought -- well, this blog is well-intentioned. Sending underwear to DC or Marvel is not the first line of defense I personally had in mind -- if for no other reason than you don't know who'll be taking those bras and panties home with them.

I'm suggesting that perhaps those who champion the cause of women's equality in comics might use instead the rallying cry of Ms. Marvel, as written by Chris Claremont in King-Size Avengers Annual #10.

The Avengers King-Size Annual is notable for several things -- the first appearance of Rogue, awesome Michael Golden art, and Carol Danvers's dressing down of the Avengers.

After explaining the bizarro circumstances surrounding her mind-rape and impregnation by Immortus, Carol faults her former teammates for not taking her seriously when she needed them most. It's classic Claremont angsty goodness, and I think, especially at the end of the speech, it is rather apropos (the emphasis mine):

"There I was, pregnant by an unknown source, running through a nine-month term literally overnight -- confused, terrified, shaken to the core of my being as a hero, a person, a woman

"I turned to you for help, and I got jokes. The Wasp thought it was great, and The Beast offered to play teddy bear. Your concerns were for the baby, not for how it came to be -- nor of the cost to me of that conception.

"You took everything Marcus said at face value. You didn't question, you didn't doubt. You simply let me go with a smile and a wave and a bouncy bon voyage.

"That was your mistake, for which I paid the price.

"My mistake was trusting you.

"After a trauma like mine, it's easy to wallow in bitterness and self-pity. But both grief...and guilt...have to be faced, dealt with, exorcised.

"There's more -- there has to be more -- to being heroes than simply defeating villains. You have a role, a purpose, far greater than yourselves. You represent what we should be, what we dream of becoming, not what we are.

"You screwed up, Avengers. That's human. What is also human is the ability to learn from those mistakes. To grow. To mature.

"If you do that -- even a little -- then perhaps what I went through will have a positive meaning.