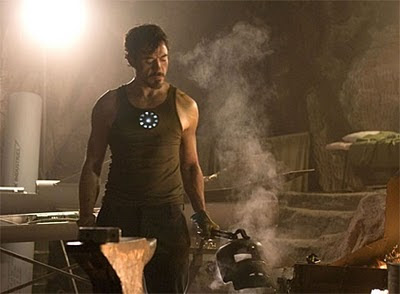 Pants had to be changed at Casa Del Occasional Superheroine after viewing these clips.

It looks really, really good. Downey is perfect and between him and Ed Norton doing "Hulk," I think Marvel is putting out enough solid movie product to tide viewers over until "Spider-Man 4" and the Wolverine movie.

Added: seems this footage is getting pulled left and right on YouTube, so here is a description of what you see:

Tony Stark: "I am cranky, sexy, arrogant, and badass! And smart!"

Pretty reporter: "Some say you are the modern-day Leonardo DiVinci! What do you think of that?"

Tony Stark: "I am badass! And dead sexy!"

Then Tony is riding in some SUV in Afghanistan or Iraq or wherever and gets caught up in an explosion. He wakes up and some mysterious guy like Liam Neeson in "Batman Begins" tells Tony,

"Without this machinery I've put in your heart, you will die."

So then we see that classic silver "boxy" armor from the early days and everybody's like: "oh man this is so cool ahhhhhh!!!!"

Then we see that better, more modern yellow-and-red armor and now we've got the CGI and he's flying and shooting things.