The Last Real Man In Comics 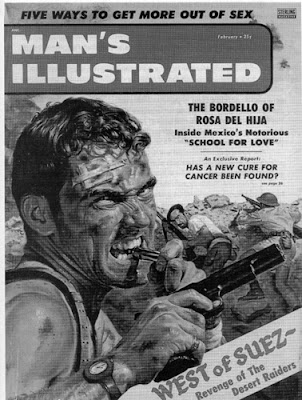 What interested me far more than Beau Smith's commentary on the pariah-cover-of-the-week "Showcase Presents Batgirl" was his "About Me" blurb:

"My name is Beau Smith. Others have tagged me as 'The Last Real Man In Comics'. That comes from a time when there was nothing but poodle skirt wearin', crybaby , hobbit lovin' liberals and former dope dealin' hippies in comics . I was one of the few if not only men in comics that liked and participated in sports, enjoyed grade B-Action movies and had done time in jail.

"I also did my time introducng other to my fists as my father and his father did. Rumors have it that I was in the first Tough man Contest in West Virginia in the late 1970s. The ones that weren't sanctioned by law and took place in the back alleys and bar rooms of various places of ill manners. My fists were sold for hire in college to girls that were gettin' smacked around by abusive boyfriends. I never wanted to take their money, but they insisted. I rarely turn a damsel in distress down. The longest love affair I've ever had is with cold beer. It began when I was in the 6th grade and continues to this day. Don't look all PC put out by that fact.. .things were different then. It was a time when Jonny Quest, a 14 year old boy , could blast bad guys with a machine gun and no one thought it was wrong."

Perhaps his bio is written a little tongue-in-cheek, but "the longest love affair I've ever had is with a cold beer" will stay with me a little bit today, at least until tonight when I have a cold beer.

Which brings up the topic of "He-Men" working in the comics industry. Larger-than-life individuals that would look comfortable wrestling with the Red Skull on the top of a moving train.

Two that come to mind is Darwyn Cooke & Howard Chaykin. Neal Adams might be a third, though his graying temples and listening him expound on his geological theories gives him more of a professorly aura.

Are they hearkening back to another time when men got up in the morning and caught their own breakfast and spent their leisure time wrestling sharks and fighting one deadly horde or another? Have they been influenced at all by the comics and movies they devoured as a kid, showcasing "men who were men," hard-as-nails heroes that predated the introspective second-guessing of the O'Neil/Lee era of comic book writing?

Beau Smith reflects on the controversy regarding the Batgirl cover,

"Who has time to think of this stuff? Is there some long line to be a victim of society that I’ve missed. Last time I looked there was a difference between being an activist and annoying. On second thought, no there isn’t. Not when it comes to this kind of time wasting stuff in comics."

Further on in the column, he profiles a MySpace hottie, with pictures.

I don't see anything wrong with the hottie photos or his take on the cover or the fact that he refers to liberals as "Hobbit-loving." The whole thing, taken as a package, has a rather cute pseudo-conservative quality about it; maybe not as adorable as Stephen Colbert, but somewhat more palatable than Guy Gardner.

As an aside, I actually clicked on the link for the hottie's MySpace page. It's...apparently not the same girl. BEWARE MYSPACE, PEOPLE!

Also, I am wondering if the "Last Real Woman In Comics" honor has been taken already. Nominees?
Posted by Verge at 10:03 AM

Email ThisBlogThis!Share to TwitterShare to FacebookShare to Pinterest
Labels: battle of the sexes