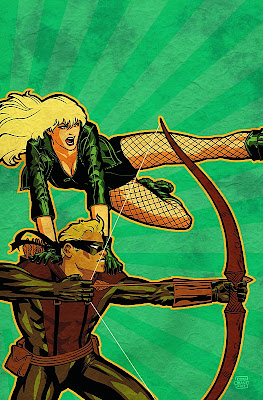 The current topic of discussion in Casa Del Superheroine is the October solicitation information for Green Arrow/Black Canary #1:

The new Green Arrow/Black Canary team investigates the shocking results of the Wedding of the Century in an all-new adventure that brings the Star City-crossed
lovers together!

Exhibit A: "shocking results of the wedding of the century"

I really think this could happen.

Which brings me to this Salon article Superheroine's Sweetie just emailed me...

"I'm a 35-year old stepmom and mother of a 5-year-old daughter. I find myself attracted to my 17-year-old stepson and, more worrisome, I think he is attracted to me. He lives with his father and me half the time and with his mother the other half. I've been in his life since he was 9 and his brother was 7, and we're pretty much a blended-family success story. Everyone gets along, my stepsons are both great kids, and my daughter worships her brothers. My husband and I love each other and are good partners in working as a team, taking care of the kids, home, work, extended family, etc., though "marital relations" are close to nonexistent, due partly to the usual stress and partly to my husband's low libido.

"The kid I used to know has grown into a charming and attractive young man who looks even older than his age."

If this is true, Ollie's gonna snap an arrow up somebody's bum...
Posted by Verge at 1:04 PM