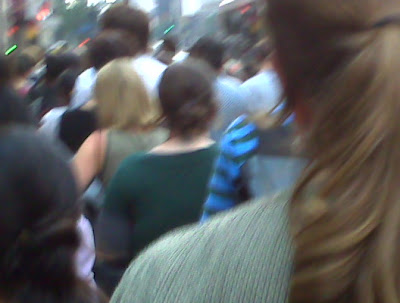 Yesterday evening, almost at 6:00, I received a phone call from my boyfriend. I had been waiting in front of my work building for him to pick me up, playing "break brick" on my PDA to pass the time.

My boyfriend never actually got through on the phone. All I heard was an explosion.

The next thing I saw was people, briefcases & handbags in tow, running away from the East Side of New York and talking about a building falling down. They pointed in the direction of where my boyfriend worked.

Soon, everybody was running, desperately pressing keys on their cellphones and twisting their necks to query the stranger beside them, behind them:

"What's going on?! Are we under attack?"

I frantically dialed my boyfriend's number but even when I could get through, it would go straight to his voice mail.

Doing the math, I assumed a building fell on him.

Here is where I measure how much I have changed in the last six years.

When 911 happened, I was a wreck. Sheer terror. And I wasn't even near the WTC.

When 911 happened, I couldn't even think.

Now, six years later, I let my body be carried away by the tide of the evacuating New Yorkers, heading for where we don't know, assuming the worst, bracing ourselves for more explosions, smoke, blackness. This, and that I can't reach my boyfriend, who is where the building collapse/terrorist attack/dirty bomb took place.

But I am not a wreck.

I calmly tell my fellow evacuees what little I know.

I turn and look towards the East Side and contemplate just walking back to see what happened to my boyfriend.

And I feel many things, and one of those things is a sense of guilt that I do not feel scattered or hysterical. I feel dread, sure. But the dread, or my sadness over my boyfriend's uncertain fate, doesn't overwhelm my judgement.

Because over the last six years I have discovered The Zone. No, not that fad diet.

The Zone is where you have lived through so many crises that you've developed an ability to look beyond the crisis, to remove yourself from it, to see the bigger picture.

You go from "why is this happening to me?!" to "huh. this sort of thing happens to people every day in the world. I wonder if I shall get out of it. well, I'll certainly give it a try."

I first realized I had achieved the zone when I was in the emergency room last year after my accident. The nurses said I was one of the most calm patients they had ever seen for this sort of traumatic injury. And I think I hardly shed a tear while I was admitted there.

So anyway, I'm in the zone, and I'm looking back towards the East Side, and I'm thinking about just just walking to my boyfriend's office. I mean, why not? What, I'm going to flee on the nearest train, assuming they're working, and just not know?

Then he finally gets through, though the reception weaves in and out. He is screaming over the sirens and alarms, asking me where I am. We establish a place to meet. I head out towards the East Side, against the current of humanity.

I'm running and calling out my boyfriend's name. I find him. He is covered in debris. I hug him.

We make our way Downtown, catching snippets of information from passersby and the intermittent news from my PDA. Slowly we piece together that a transformer blew up. Later, the explosion will be blamed on a burst stream pipe. No buildings collapsed, but there is a modest crater in Midtown.

Some of the debris got on my mouth as I kissed him. It tasted bitter, it made my throat tight. It was, we assumed, mud. This morning we took the advice of the mayor and bagged up my boyfriend's shirt, boots, bag.

The Zone wouldn't even allow me to get s**t-faced drunk in order to cope with the stress I just went through. After 911, on the way home, I ducked immediately into a liquor store, which was quite full. But yesterday night I could hardly drink a beer. I just wanted to sleep. We both did. And we did.

In the morning, I debated going back into work.

"You've already taken too many days off for San Diego," my boyfriend reminded me.

This was true. His job was in the "frozen zone" area, so he would be working from home. As for me, I suppose I could have called in to my boss, said I couldn't make it in today because of what happened and the stress and trauma.

But that excuse just wouldn't be true.

So I emailed some photos from the incident to my boyfriend, photos of office workers evacuating and him covered in spattered mud. We watched the news coverage on NY1 as we sipped our coffee. We kissed and then I retreated into my bedroom to write this.

When the "frozen zone" is reopened, I would like to take a look at that long, jagged fissure down Lexington. But it might be filled-in by the time I get there. Because Bloomberg is so damned efficient.
Posted by Verge at 7:13 AM