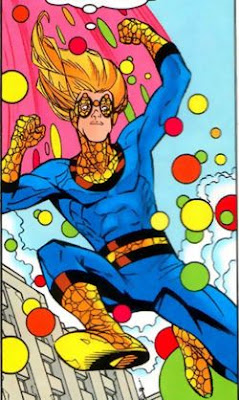 ...never fails to fascinate and amaze. A really interesting look at the making of past present Marvel books -- the good, the bad, and occasionally the ugly. Props to Marvel for being so candid.

Here is the column about the making of Civil War. The following quote regarding Speedball really caught my eye:

"Cripes this kid is your Sue Dibny except his insignificance in Marvel continuity and his connection to Tony is that tiny hole in the dike that starts the flood."

Yes, Speedball is to "Civil War" as "Sue Dibny" is to "Identity Crisis" (except Speedball doesn't get raped). He is also a victim but not a victim -- the cause of all the drama that is to follow and yet also a relative innocent (we will forget the whole "drug den" thing in "Alias") that is totally crushed by the horror he inadvertently unleashed (though, of course, according to the Deadpool/GLI special & Squirrel Girl it all really wasn't his fault anyway).

Anyway, the blog is fascinating, check it out.

PS: Just purchased a hardcover collection of "Identity Crisis" at a used book store. First thing me and my shopping companion did was turn to the masthead to see if my name was in it. Then I was thinking of doing a live-blogging thing maybe on Twitter to give commentary as I read it straight through. Started to read it, then headed straight into dinner with friends at an Afghan restaurant. Pepto-Bismol.
Posted by Verge at 10:49 AM