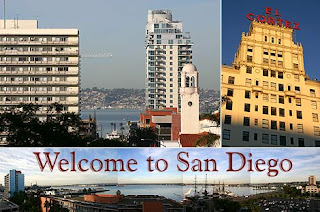 So here's the story:

Wanted to go to San Diego Comic Con this year. I promised myself last year I would go. Actually, been promising self 15 years that I would go.

No money to go.

Oh sure, I had money for the important things. Like a T-shirt that reads "I'm so sweet, I'll give you cavities."

But for things that *really matter*?

No money. Lint pockets. I've got nothing.

Well, I'm involved with a project now that I almost can announce but not quite yet and I'm going to San Diego.

Here was my pitch:

"You know like when Joan Rivers does that live from the red carpet thing and she slobbers all over the celebrities? That could be me!"

Of course, my face is not as tight as Joan's. And I have no adult daughter to support. But you get the idea.

I'm no Katie Couric but I'm a fan and I'm going to approach this thing like a fan. Which of course you're told never to do. But I wouldn't know how to do it any other way.

Massive pimpage of said event to be forthcoming. And I hope you all will join me.
Posted by Verge at 7:43 AM