Theories On The
New Captain America
Okay, so Cap is really dead -- we've been shown his autopsy, his funeral, etc.

Comic book logic says that Steve Rogers will return -- but, just like not explaining away Tony Stark's actions by saying he was really a Skrull, it's important for Marvel not to invalidate the investment fans made into "Civil War" by backtracking.

So my money is on a completely new character taking on the Captain America mantle --perhaps "permanently."

This will not only be a decision frought with symbolic meaning and drama -- but one carefully thought out for branding and marketing reasons.

Maybe Steve Rogers was considered too white-bread, too irrelevant to connect to new readers? I'm not saying he is, so put the pitchforks away. But think of Barry Allen with his crew cut and bow tie, and how Wally replaced him. Maybe this is the case here. And if so, perhaps Marvel will go with Bucky Barnes. 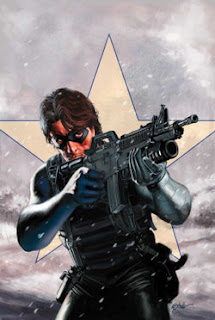 Or how about The Falcon? Why not? He's earned it. I see no reason why Cap *has* to be white. It would be the inspired choice. 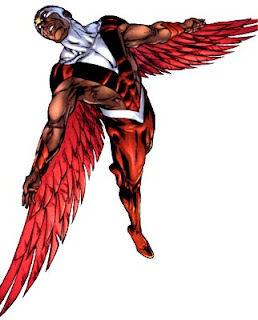 Or how about Cap as a woman? Sharon Carter immediately pops to mind...if it only wasn't for that whole "killing Cap" thing...

Or a team of Caps? Alternate Caps? "Captain America" force?

Personally, my money is on Bucky, though I would most like to see The Falcon in the role.

Or maybe they could just bus in Jason Todd.
Posted by Verge at 7:01 AM