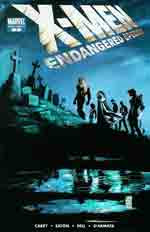 Marvel Comics
Writer: Mike Carey
Artists: Scot Eaton & John Dell
A whole lot of pages of the X-Men out-of-costume and whining about the plight of mutants whilst standing in a graveyard. In other words -- them doing what they do best. The "My Dinner With Andre" of X-Men stories, this is not everyone's cup of tea -- but as a woman raised on a steady diet of Claremont-angst I enjoyed this comic. Really cheesed me off though when I turned to the last page and there was a checklist for yet ANOTHER crossover event (grumble grumble). Totally on the fence as to whether I'm following "Endangered Species" or not, but basically an enjoyable issue with nice Scot Eaton art. 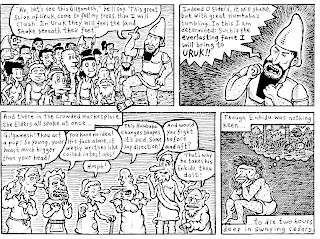 "Gilgamesh" is ancient Sumeria meets R. Crumb, a funny, fast-paced adaptation of the timeless myth. Gilgamesh, King of Uruk, is the equivalent of a modern-day superhero but lacks essential qualities such as humility and empathy for others. Enter Enkidu, a "noble savage" with a huge heart who is created by the gods to be Gilgamesh's perfect companion. Together they set off on many adventures, starting with confronting the fearsome Humbaba in issue #2. Whether depicting Enkidu's first sexual experience with a temple prostitute or illustrating a four-page slugfest, Kevin Dixon's art blends a primal energy and occasional slapstick approach with a presentation that is ultimately faithful to the source material. Recommended.

Marvel Comics
Writer: Jeff Parker
Artists: Juan Santacruz & Raul Fernandez
I would recommend all the stories in this third volumn of the collected kid-friendly "Marvel Adventures" series, but the M.O.D.O.K. story is the s**t. It is required reading, and the only way you could not enjoy it is if you simply *hated fun*. You don't hate fun, do you? Long story short, the Avengers turn into M.O.D.O.C.s (the "C" instead of "K" replaces "killing" with "cotton candy," or something like that). Yep, they have big heads and talk like Stewie from "Family Guy." Oh, you might ask why Iron Man's armor shrank along with his body. You may ask a lot of things. Don't. Just read and worship the insane coolness.

Abstract Studio
Writer/Artist: Terry Moore
I received the requisite emotional payoff for the time I’ve invested in this series; I’m satisfied. Instead of an existential "Sopranos" type non-ending, most of the threads get resolved -- especially the biggest and insistent thread of all. The resolutions are almost a little too pat for my taste -- multiple pregnancies in a myriad of combinations and the matter of a certain sudden inheritance (that made me groan). But these characters have been through a lot, so mazel tov.
Posted by Verge at 12:00 AM