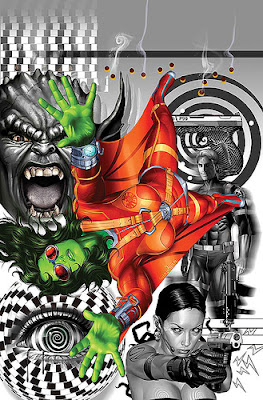 Note to online comic reviewers: Dan Slott reads his reviews. And if you rip him a new one -- like Comic Slop did with his last She-Hulk issue -- don't be suprised if the dude responds.

Slott:
"No. Nine-year-olds are not the intended audience for SHE-HULK. I have actually made a point of that at comic signings, letting parents know that this is a book their wee-ones should NOT be picking up."

And Slott:
"Starting with #15, the character has been promiscuous-- maybe even recklessly so. She's had two flings and tried to initiate a third. If you want to call a person-- who's come off a longstanding-but-failed relationship and then played around with 2 lovers-- a "strumpet", that's your call. I don't think this would even be an issue if the protagonist of this comic were a man."