Fear of Big Ones 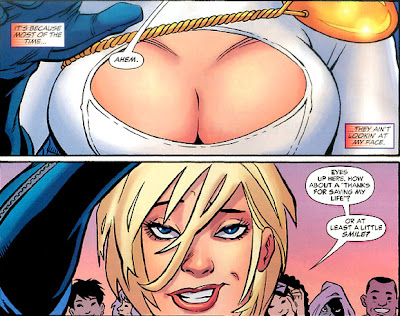 When I was in college I belonged to a feminist organization for English Majors. I had never really done any "feminist" sorta things before this, having been raised on largely male-oriented media and having mostly male friends. But college introduced me to a world of new perspectives, and I embraced them.

We had health fairs where we taught about AIDS awareness and issues about rape. We had a sexual harassment taskforce. I introduced the idea of using the comic book format to introduce our ideas to a wider audience. We had poetry readings, "women's spirituality" talks, everything.

One day on an open mike poetry reading a new girl that we hadn't seen before stepped up to the front of the room and read her piece. She had giant breasts squeezed into a tight silver spandex shirt. After she read, and her and the other women who were not of our "core" group left, I was witness to the following exchange:

"Can you believe the nerve of her?"

"Those ugly things...they're so fat!"

"She thought she was all hot and stuff. Like she was better than us."

"She just does that to get attention from guys. It's so *pathetic*."

"She doesn't love herself."

Between this and the way the one guy who *was* accepted into our group was treated (alternatively as "resident beefcake" and favored eunuch), I lost interest in the group. No, it wasn't that I lost interest. My idealism took a hit. I held this group to a higher standard than others and maybe that was wrong.

But I still think we need to examine more closely why we think the depiction of big breasts in comics is offensive.

I know that part of it is that that particular physical attribute is used too often -- this is true.

I know that part of it is that big tits are often used as a way merely to stir up male sexual interest -- this is true, and it reduces the female character as merely an object of the male gaze.

But I also think there is probably another factor in play that's never addressed. And it probably never will be. And that's ok. But I know this factor exists.
Posted by Verge at 6:22 AM