The Daily Gilgongo for May 14, 2007
Let the Superheroes Unite playlist on Napster be the soundtrack to your life, and enjoy such melodies as Queen's "Flash," Black Sabbath's "Iron Man," and Styx's "Captain America." What, no "Magneto and Titanium Man?"

Dirk Deppey at Journalista! responds to the whole "Comics Aren't For Girls" controversy with an excellent dissection of why this image is disturbing: 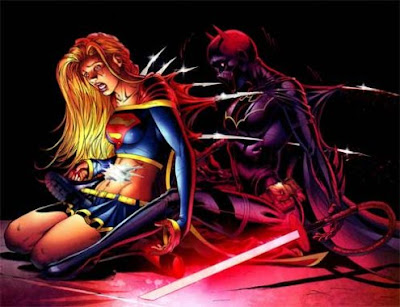 "…isn’t that it’s misogynist, but that it’s fucking ridiculous. This looks like sexual-fetish material, sure, but it would have exactly the same weird-ass vibe if both of the depicted characters were men. This image isn’t “sexist,” it’s emotionally stunted. Wrapped in the garb of teenage fantasy, it cannot help but take on an air of unreality that no infusion of sex or violence will dispel. Sixty years of accumulated kiddybook clichés won’t suddenly become adult reading material if you add lesbian relationships, hardcore gore or extended scenes of chartered accountancy; the latter only throw spotlights on the childishness of the former."

But let's forget all this heavy talk of kiddybook cliches and discuss something that really matters: like this cute Persian kitten with a Batman cowl! Awwwww...I just forgot all about Darfur!

Finally, here's a clip of James Marsden singing "Witchcraft" on the "Ally McBeal Show." Why post this, you may ask? Because I can...because I can.