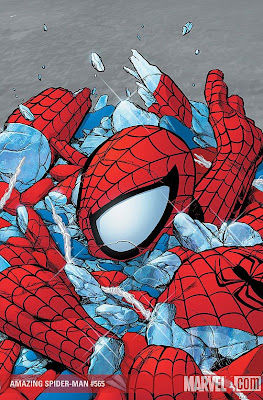 Read "Amazing Spider-Man" #565 yesterday. Have kept up with the title on-and-off since the first couple of arcs of the weekly format, and I thought the current storyline -- featuring a new, female Kraven the Hunter and art by Phil Jimenez -- was a good place to jump back on board and stay on track.

I'll get more into the specifics of the issue another time, but I just wanted to point out that apparently Peter Parker is now working in a comic book shop.

I don't remember if by the end of the issue Parker managed to screw that up too, though the scene starts off with him getting dressed down by his boss.

Also, since the comic book store in question is very close to Union Square in NYC -- might I assume it is some sort of analog for Forbidden Planet, which is also in that area?

I find it a bit ironic that Parker would end up, after all his many exploits and adventures, sticking price labels on old back issues of "Alpha Flight." See, if he didn't make that dumb deal with Mephisto and lost MJ, none of this would have happened.

I want to read Parker's Facebook updates, dammit.
Posted by Verge at 11:45 AM