Fangirl Fridays: The "Thank You For Buying Countdown!" Edition 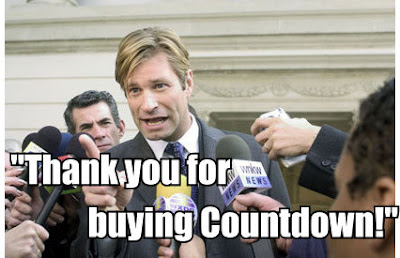 What is it with comic book fans using the word "rape" and "sodomy" in connection to storylines and reboots they don't like?

"You raped my childhood!"

"They committed sodomy on the fans!"

"They're asking the long-time readers to bend down and take it!"

Now, I totally understand the rage and anguish fans have over seeing beloved characters retconned out of existence or shot in the head. But why this reoccurring sexual imagery?

I'm going to play Devil's Advocate and lay out some online PR strategies I think comic book companies might use to their advantage.

1) Sure, by all means have somebody from your team go on message boards as "fans" and counter the bad press. That should be part of your overall PR strategy. It happens all the time. But make sure they are people versed somewhat in actual PR training or methodology. And I'm talking current PR methodology. You can't go on a thread with your brand new spanking "Newbie" Comic Book Resources persona and counter the sea of negative reactions by posting: "No, BLANK COMIX is awesome! I'm so excited about it! You should buy it!"

First of all, you have no cred in that online community whatsoever. Very few to none posts, not so much as a "hello!" on the Introductions thread. And so you carry your unpopular opinion with you to this board or blog, and just drop it in their laps. It's the equivalent of farting in a crowded room, folks.

Such PR needs far more subtlety and a conversational tone. You should gently explain why BLANK COMIX! is, despite popular opinion, worth buying. Create a slight doubt in the naysayer's mind. Be respectful. Above all, be human.

2) Shutting down threads and fan websites is pretty much the worst PR you could possibly create. I know you feel you are "controlling" the publicity flow. But you control the publicity flow (to the extent it is even possible) by interacting with the fans, especially those who are negatively regarding your comic. Silencing and remaining silent never ever helps. By dialogue you defuse.

3) Some editors and talent are natural PR people themselves. They have sparkling, jovial personalities, are popular with fans, and possess a certain instinct as to what and what not to say. Others, however, are trainwrecks. Learn to distinguish between the two. You give a trainwreck their own unedited editorial page or sprawling Newsarama interview at your own risk.

4) Today's consumers don't like to be "sold" to. They are bombarded by sales pitches in the form of 1 billion commercials and ads every day -- on TV, in the newspapers, pasted on taxis, flashing all over their computer screen. They come to their comic book media outlet to get away from all that, to derive a little bit of pleasure from their favorite hobby.

After a while, your numerous previews on Newsarama, Wizard, and Comic Book Resources lose all impact and meaning. The readers think you are in bed with these websites; that is their perception. This perception hurts both the website and your product. It produces apathy.

You would be far, far more successful by approaching Scans Daily or a specially-selected group of personal blogs and write them a personal e-mail inviting them -- asking if they would be so kind -- to post these exclusive pages.

And then use your connections with Newsarama and the rest to run a completely different type of story on your book. Use an interesting angle. Tie it in to current events. Make a poll or contest. Something. Just make that "something" intriguing and unique.

5) Admit when you've failed. Don't get defensive. Whatever you do, don't get hostile or defensive. Or arrogant. Acknowledge popular opinion and then explain how what you are doing from now on differs from that. Try the "It's A Whole New Era" approach. Even if the distance between eras are a few issues apart.

6) Yes there is a big untapped female market out there, yes you have no clue, yes you've continued to alienate and horrify them, yes even when they buy your superhero comics they are often ashamed to be seen with them in public. No I'm not giving you free insights on how to change this.

Here is a Zen parable for you to consider: 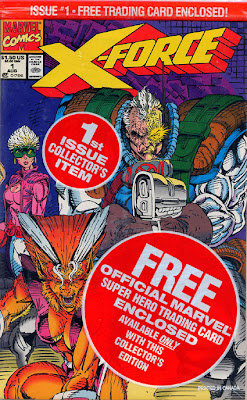 There was a time when this was the biggest selling comic book in the world. Meditate. Then take a bath.
Posted by Verge at 8:26 AM