"Comic Books Will Destroy You" 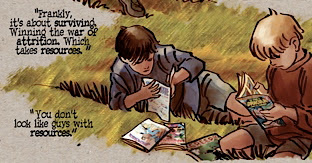 How many times have I heard variations of this theme from old-time collectors, veteran comic book writers, jaded editors?

That's what I thought about as I read EZ-STREET by Robert Tinnell & Mark Wheatley on Comic Mix. (The entire graphic novel is being serialized there for free, by the way). 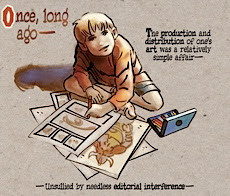 ...I'm trying to save you from a lifetime of misery.

See -- you can be really, really good at something-- anything-- when it comes to the arts-- and it won't matter.

It's all about networking and ass-kissing and--

Frankly, it's about surviving. Winning the war of attrition. Which takes resources...

I'm not being mean. I'm telling you this because I like you...

You need to give this shit up right now. Before it's too late.

Do you want to be thirty-five years old owning nothing but deft on a credit card? Trying to break into a business you love? And finally realizing the dirty little secret--

That it doesn't love you back?!

Compare this to other off-the-record quotes I've heard in my career:

"Look, if Michelangelo stepped into this office right now, I couldn't give him work unless he was a big name. I can only use big names."

"Sorry I didn't make it in for the meeting today, but my arm just got numb for no reason. Doctor wanted to check it out. It was weird."

and later, the same person,

"They found me unconscious on my bathroom floor. For no reason. One moment you're awake and the next you're not."

and later, the same person,

"I'm just going to put my time in, and get out. Just another couple of years is all."

"The problem is that they think comic books owes them. That's the problem with hiring fans."

"I don't hate the man. But he was an alcoholic and bi-polar and he made the lives of everyone around him miserable. And yeah, I guess I hated him."

"He never recovered from having to do that. He was too nice."

"And then after she was fired she had all her belongings put out in the hallway for people to take."

"Did she give her time to take her stuff?"

"Nope. I think there's still stuff there. Do you want to come see if there's anything left?"

"And nobody even had the decency to tell me about the new team. I had to find out on Newsarama."

"And I asked them why I wasn't being hired anymore, give me a reason. I mean, what else am I good at?"

(gesturing to his office)

"One day I'm getting out and selling all this on eBay. And I'm going to live like a king. I may even go to the Bahamas."

About a fairly famous comic writer:

"He's not that great a writer. But he's a great networker. He knows just what to say. And that's how he built this."

"So everybody gets laid off except the same core people who have been drinking with each other every week. Funny how that works out."

"I made him what he is today. Back then, he was just this greasy, nerdy fan. Didn't know how to dress. I had to teach him how to dress!"

"I-isn't that him two tables down?"

"I remember he picked up this desk and just threw it into the wall. And he was the type of quiet, serious guy who didn't do things like that."

"He's a brilliant artist. Too bad he's on the coke."

"So one day he calls three of us into his office. And my friend tells me, 'you know, he's going to fire us. And I'm okay about it, but I'm worried about BLANK
Posted by Verge at 5:30 PM