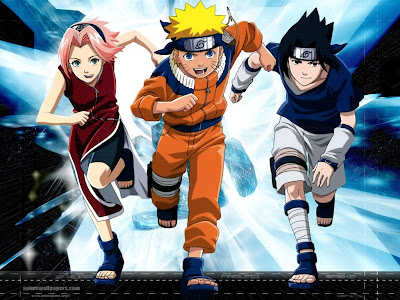 How does mainstream comics crack the ever-more elusive "kiddie" market? Well, had they purchased booth space at last weekend's New York Anime Festival at the Jacob Javits Center, they might have started to have a clue.

The main thing that hits you when you enter this convention is that it is filled with YOUTH.

There were teens and tweens and little kids with their parents EVERYWHERE.

And it wasn't just about a specific type of comic -- in this case, manga -- or style or type of artist.

The vibe at the New York Anime Con was about a whole YOUTH MOVEMENT.

And whether Peter Parker is married or not or Batman is Bruce Wayne or not makes not the single whit of difference to them.

If mainstream comics does not make a better effort to understand this youth culture, they might still have a bit of fair success with the older market. But they will both competely lose the youth market. And they will at the same time fail to plant the seeds for the next generation's interest in their products.

I am willing to bet that lot of this hesitation of the mainstream to embrace and study this emergent youth culture is because they personally don't "get" manga. Frankly, manga might not be something they would be interested in reading/editing.

The key here is that there has to be a willingness on the mainstream's part to look beyond the fact that they don't "get" it. They have to be willing to embrace the idea that what the "kids" want is not what they want. And that's hard, because rolled into that is the realization that they are getting physically older. It's the realization that there is a whole line of generations out there that are ready to assume their place on the queue of life.

I don't "get" great portions of manga. I don't "get" Naruto. I don't "get" large parts of this anime scene. But I accept the fact that this culture is a widely popular one and that it behooves me to learn about it and understand its appeal.

Which brings me to my final point. As I said before, the energy surrounding manga culture is not just an art style or a book format. You cannot hire an artist to draw manga-style art and give it a soap-opera theme with robots or whatever and write it with the energy of American comics. Neither can you package any damn thing you want in a manga-sized book and say "presto! we have Youth Culture product!"