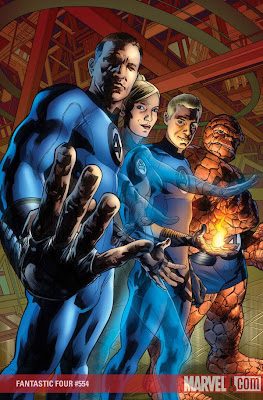 I thought I would just lob a few opinions out there that might be controversial, or not, we'll see. Some have already been field-tested. :-)

1. I really really really enjoy the Mark Millar/Bryan Hitch Fantastic Four.
I do. The book looks beautiful. It presents the characters is a way that I can relate to and enjoy. This is the first time I've really felt motivated to keep up with the book as a monthly. And the interior artist also draws the cover -- bonus! And I even like the way the logo is composed on the cover. Sold.

2. Vertigo comics & trade paperbacks are printed on shit paper.
Yes. It's true. Why go through all the trouble of producing something like Northlanders only to print it on shit paper? Are the trades for Northlanders printed on shit paper too? The key is not so much the paper itself -- rough, one step up from newsprint -- but the color palettes used. Books like Scalped, Northlanders, and Hellblazer usually have darker, moodier palettes. These are rich palettes. You can't have these palettes on crap paper, because the paper can't "hold" that richness. Rich color on crap paper looks like murk. Now, I can understand if you are doing it for the monthlies. But the trades too? Read a trade for Scalped -- shit paper. Surely these better-selling Vertigo titles deserve something better? Yeah, I know that keeps the price-point down -- but at the cost of making the book look like a murky smear?

3. Gender might impact one's creative output.
Certainly not in all cases! But there might be general trends. I just don't buy that gender has zero impact on creative output. I mean -- zero impact? Really? I'm just the same as a man? That's bullshit, I'm not the same as a man. My "wiring" is not the same as a man's. My hormones are not the same as a man's. The immediate, everyday details of life that I instinctively observe are different. I'll say it: I care more about emotions and feelings. And I'm saying this as someone who considers herself a bit more "mannish" than the average woman. Does denying these differences really help me? It's like some corporate chick when I was working in advertising, she told me to never admit you menstruate. Fuck -- I menstruate! I'm not going to mention it at the board meeting. But I fucking bleed, and I get bloated and feel shitty and emotional too.

The problem comes when the idea I have outlined gets interpreted as meaning (for example) "women don't write as good as men." Obviously, this is not the case. JK Rowling, Patricia Cornwell, Anne Rice. That chick who wrote "Twilight." Multi-billion dollar authors. But my point is: why is this not yet translating to the comic book market in the numbers that it should? How does a female writer work with a comic publisher to maximize her strengths and audience potential? Does she do it by positioning herself as "another Geoff Johns/Brian Michael Bendis?" Or does she do it by saying: "Yeah, I'm different. Different and awesome. And it's exactly my difference that's going to sell this book." That's the key -- how do we use this natural difference in a way to sell the product?

4. I think the direction of Amazing Spider-Man post-"Brand New Day" has worked.
I tried to approach the Spider-Man comics several years ago and gave up. That "Other" storyline? I couldn't follow that. The continuity had become impenetrable for me. As a new reader, I was turned off. But now, I feel I have been given an even platform onto which to begin my re-involvement with Spidey. And buying the weekly books has just become a habit. I might not read all of them right away. I read the arcs in chunks. But it works for me. I guess it becomes a question of, should comic book companies try to grab new readers on longtime titles? Can we streamline the continuity a bit? Like in Invincible Iron Man. And I think you periodically need to do that.
Posted by Verge at 8:53 AM