RE: Marvel & DC Flooding The Market With Comics 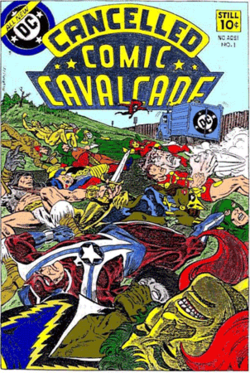 Some casualties from The Glut of Comics Past
Hasn't this always kinda happened – the "circle of life" of the industry, as it were? Flood, boom, bust, repeat?

I don't care if you're a major publisher or not, the real key is striking a chord with the modern zeitgeist. Two buddies with a Xerox machine can do that. But it takes 1) A real sense of what is important to people nowadays and 2) a pair of balls.

You can't create that sort of magic in a boardroom. By its very nature, such projects find themselves in conflict with the ultimate needs of the corporate machine, which rarely wants to take a chance. That sort of magic largely happens by accident, with projects that have managed to slip by management unnoticed and, by some miracle, make it to the stands. Then they get hailed as a "genius" – and then, realizing they have a great hit on their hands, the publisher milks it for all its worth with dozens of sequels and spinoffs and similar projects. That's the comic book Circle of Life. And that's largely the entertainment industry's Circle of Life.

So to me, all other business strategies take a back seat to actually publishing that book or series that seizes that zeitgeist and sets the world on fire. That's the only way the industry actually grows and develops: