The Future Of Comic Book Magazines 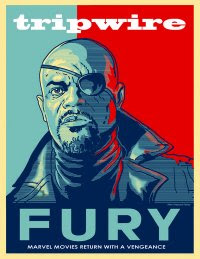 "TRIPWIRE Annual 2009 will not be carried by Diamond US because it didn't make their benchmark. So the only ways that people in the US will be able to buy TRIPWIRE Annual 2009 is 1) buy it at their local Barnes & Noble; 2) Buy it off us at Comic Con in San Diego from our table or 3) Pester your local comic shop to order it from us directly. We are happy to supply US comic shops directly at 50% off cover with a minimum order of 5 copies."

I'm not a big follower of the whole Diamond "benchmark" thing, though I know it has led to a bunch of books being dropped by the distributor. I guess not carrying "TRIPWIRE" just sort of raised my eyebrows because I always thought that it was a pretty basic comic/pop-culture publication, even in the United States (it should be noted that Diamond UK has picked up the annual).

I just remember going to the larger comic shops and being able to buy all the British pop-culture magazines (many of which are WAY superior to their American counterparts). Under this benchmark system, would I still be able to do that? Or are the stores going to order these mags from alternate distributors?

With "Comic Foundry" and "Comics Now!" gone, and "Wizard" seemingly in a not-so-awesome state...I dunno, what is the fate of the comic book magazine nowadays, anyway? Or the pop-culture periodical in general?

I'm just musing on it, I'm not offering any amazing insight or answers.

And I just know I'm going to get pilloried for this, but maybe the big companies like DC, Marvel, and Dark Horse should just put out pop-culture/comic magazines for the mass-market with an article/comic mix. Something to just introduce the mass-market reader to their comic book properties and storylines. Something like Wizard, but in-house from the publishers themselves. And something that leverages the notoriety of their movie, TV, and video-game licensing.

I realize that sounds as materialist as hell, but that's all I got.

Anyway, as a quick plug for TRIPWIRE, the 2009 annual features:
•Stan Lee on Marvel's 70th anniversary plus a look at the future of Marvel movies
• Solomon Kane history feature including a look at Dark Horse's Robert E Howard line
•Guillermo Del Toro on his novel The Strain
•A look at the sleeper hit of the year, British low budget sci fi movie Moon with director Duncan Jones
•Joe Kubert on returning to Tor after years away
•30th anniversary of Alien feature
•Profile of Flesk Publications plus interviews with Mark Schultz and Gary Gianni
•A look at Tintin in the year of his 80th birthday
•Celebrate Batman's 70th anniversary with a look back at the character's history plus Frank Quitely interview
•Ian Rankin on Dark Entries, his graphic novel for the new Vertigo Crime line plus Vertigo's chief Karen Berger on the new line
•DC's Wednesday Comics series
•Bill Morrison talking about Bongo in the runup to The Simpsons' 20th anniversary
•Interview with fine artist and illustrator Phil Hale, the man who painted Tony Blair's leaving portrait for the House of Commons
•Being Human feature looking at the hit UK genre series
•Strips from Roger Langridge, Punx, Kevin Mullins and David Hitchcock
•The Power List 2009
Posted by Verge at 3:09 PM