The Plain Janes Have Left The Building 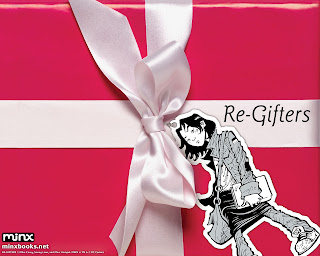 Virgin won't be the last one to fall in this period of economic slowdown/clusterfuck. I expect more sudden axes to fall -- not out of any insider info, but based on that same ghoulish intuition.

Minx, the line of manga-sized graphic novels for girls, is no more.

As of early this year, I really couldn't see DC's Minx line going any further. It wasn't for lack of quality. It wasn't for lack of promotional dollars on DC's part -- they did co-sponsor Friends of Lulu's Lulu Awards again this year on Minx's behalf. Further, they gave away promo copies of all their new releases at MoCCA Art Fest this year. But Minx had the same vulture standing over it that I've seen time and time again -- that I saw with Virgin, that I saw with CrossGen, that I've seen with countless imprints and publishers that didn't quite know how to precisely target and capture its niche audience -- or even really knew who that audience was.

Theoretically, Minx was a line of manga-sized books for teenage girls. Most of the titles were pretty decent reads for the stated audience; a few, like the otherwise excellent Waterbaby, were masterfully executed but way too adult.

Were the Minx books "comics" or "books?" Where were they to be racked at the comic shop, and where were they to be racked in the book store? As of two weeks ago, I saw Minx titles kept in the "teen novel" section of Barnes and Noble -- some distance, perhaps a whole floor or two, away from the graphic novel section. Would there be that crossover readership from the teen novel crowd? Would they open up that copy of Re-Gifters and be like "hey, cool" or would they be turned off?

Really -- I think some of it is that when DC set out to create "a line for girls" -- they looked, despite themselves, despite great rosters of talented people, more towards "Archie" than "Harry Potter" or "Heroes." I think they should have done more sci-fi and adventure books, or at least blend more of those elements in some of the line (Kimmie 66 was one -- but you wouldn't know it by the cover). The girls at the conventions that I have talked to for the last two years -- most never heard of Minx. When I asked them what they were reading, all the genres they mentioned were sci-fi, fantasy, and horror.

Then there was the tacit lack of any of the titles of under the Minx imprint being springboards for movies, TV, or other media. This has been the big song-and-dance DC -- and so many other companies -- have been using for a while now: "we'll develop it for film!" "We're the IP farm of Time Warner!" And yet -- where is the Plain Janes movie?

And some of it is that this economy stinks and that any line or imprint or publisher that is not drawing a true income beyond some pipe dreams and 5-year-plans is most likely going to get axed. Hate to say it, it sounds cold, it's what's gonna happen, and it ain't over.

But lastly, a female-oriented line of books could never succeed at DC because when it comes to females, they just don't fucking get it. They don't. They have such a shitty legacy when it comes to this subject, so much choking vile karma, that the attempts they make to "balance the scales," as it were, seemed token.

The Minx line launched on the same week Goodbye To Comics hit the Internet. Publicity for their line of "girl power" books was overshadowed by a rogue ex-employee with horror stories of sexual harassment. You can't make that up, you can't plan it (I sure as hell didn't), it's just so telling and so true.

The Plain Janes: A crazy serial killer stalks Main Jane and stuffs her in a refrigerator.

The Re-Gifters: Dixie is forced to eat Adam's eyeball.

Emiko Superstar: Emiko runs afoul of a local gangster and is tortured to death with a power drill.

As Good As Lily: Grace gets her heart stolen -- literally (chuckle!).

Confessions of A Blabbermouth: Tasha is mauled by the dog next door and is in an induced coma at the hospital.

Kimmie66: Kade is shot in the spine by an anarchist and is paralyzed, forced to spend the rest of her life in a wheelchair.

The New York Four: Riley gets impaled -- and not in good way!

Burnout: Ironically, Danni herself is set on fire after being killed by a bitter feminist who shrunk to microscopic size and left footprints on her brain.

Email ThisBlogThis!Share to TwitterShare to FacebookShare to Pinterest
Labels: minx