Comics Are Expensive: TRANSHUMAN #1 and PROOF #6

Comics Are Expensive is written by licensed Expertologist Chris Lamb. Don't try this at home, kids.

In hindsight, I should really learn to look at the next week’s shipping lists before declaring the subject matter of future columns. Not that this week’s books are bad, mind you, just that, by saying this installment would again be doing the all new books thing, I sorta cheated myself out of the chance to spend a few hundred words gushing about the new All Star Superman. Oh, sure, I can say over at my site (coughexpertologistcough) that’s it one of the most beautiful comics I’ve read in a good long while, capturing everything that makes the character great in all the shades of thoughtful poignancy and inspiring heroics you could want, but that’s hardly the same, y’know? Ah, well. There’s still plenty to talk about in the meantime, so best to get on with it. 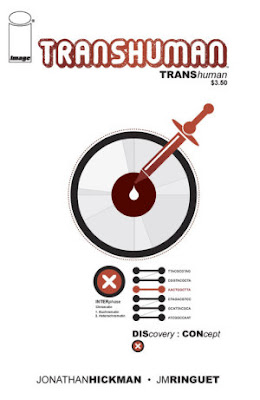 Artist: Jim Ringuet
The most impressive thing about Jonathan Hickman is perhaps his apparent inability to sit still. Rather than resting on his laurels after appearing on the scene with last year’s successful Nightly News, he almost immediately dove into Pax Romana, a story involving time travel, the Roman Empire, and Vatican-inspired dickery with promises of more to come once this initial four-issue mini-series wraps up. New book Transhuman makes three, and already looks to explore themes similar to Hickman’s other work, namely the tendency of greed run rampant to ruin everything it touches.

And it’s here we come to something else to be impressed by: Hickman’s storytelling is already showing signs of maturing past his first work, with a presentation and approach more subtle and sophisticated than I’ve seen from him before. Nightly News was a good book, if slightly weighed down by a predictable ending and a need to attempt to shock in all ways possible rather than just the right ones. Transhuman, on the other hand, already has a calmer, more careful feel to it (despite still not being able to resist breaking character a bit, even if for one of the better jokes to be found here), one that allows information to be dolled out at just the right pace to keep you hooked. The idea of framing the book as a documentary of the events that shaped this future world is a great one, allowing the use of an approach to storytelling I don’t really remember seeing in comics before (though I’m sure it’s popped up somewhere else): the oral history.

Which brings us, rather handily, to what it’s all about. Transhuman is the story of the next great step in humanity’s evolution, the people who got us there, and what was in it for them. While just the first issue, all signs point to Hickman taking the road less traveled here, opting not to focus on the global effects of genetically engineered superpeople becoming common place, but the commercial ones. Right from the start it appears we did okay by the advent of genetic tomfoolery, though some dark secret no doubt lurks at the heart of it all: the average human lifespan is on the rise, it’s an age of renewed human ambition, etc. For all the sunshine and roses of the far-flung future, however, it appears the road there was somewhat smooth. We meet the founders of two companies racing to be the first to make the great leap forward (and claim the unspeakable fortune waiting on the other side) and get a taste for the animosity fueling their less-than-friendly competition. Early failures involving monkeys and a messy group of early human volunteers hint at the sort of disasters a marketing war over the fate of humanity itself is sure to create, and I’m looking forward to seeing what else might have gone wrong under the not exactly stable hands of the people we meet here.

Mostly, though, I’m just looking forward to more. Transhuman shows great promise, establishing a firm foundation by providing just enough information to hook you in and give a sense of where things might go while leaving the field wide open. All kinds of questions abound – what is the world like, now that we all have access to superpowers? Is genetic engineering the norm now, or did cybernetics win out? How far is the fight between Janice DeAugustino and ex-husband Dave Apple going to go, and how long before the line between personal and business is completely lost? Hickman and Ringuet have three more issues to lay out the answers, and while they may not all be what I want to hear, I can’t imagine they’ll disappoint.

BUY STATUS: Unless things take somehow take an unthinkable turn for the horrible next issue, I’m in for the whole mini-series. I should also get around to finally reading Pax Romana as well. 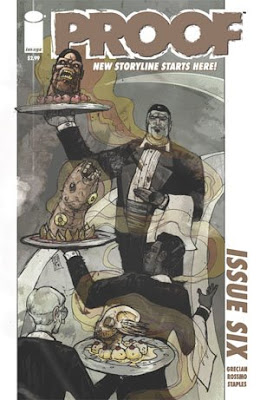 Artist: Riley Rossmo
As a rule, there are worse ways to be introduced to a new comic than a first page splash of a family of dinosaurs peacefully grazing in a modern African jungle just moments before having their own “don’t go into the meadow” moment. The same applies to main characters – sure, anybody can do a book about the secret life and adventures of Bigfoot, but to put him in a button up shirt, tie, and sweater vest just says something about you as a creator. There’s class, and then there’s class, yeah?

That said, I can’t claim this particular issue blew me away. It is indeed the start of a new story arc, just as the front cover claims, and is clearly intended to serve as a jumping on point, but I’m going to need at least another issue or two to know for sure if this is just a furry riff on Hellboy or something more. The main characters don’t really do anything beyond hang out and talk about the last storyline’s adventure, none of which gives me a feel for who they are or where they’re coming from. The villain, Colonel Werner Dachshund, is rather interesting – I can’t remember the last time a bad guy’s master plan was to eat the hero, and I’m curious to see where that goes. All in all though, I’m left feeling like I would have enjoyed this more if I’d been reading since the beginning, which is not the sign of a good jumping on point.

Let’s be clear: Proof is not a bad book. There’s clear potential for this to be a lot of fun – the dialogue moves at a nice clip, always-fun internal team drama brews under the surface, and, as mentioned before, the main character is a nattily dressed Bigfoot. While this issue on its own might under whelm, there’s enough here for me to want to see what the story is capable of once its done setting up. If it can deliver on the promise of its ideas, then Proof could be something really special.

BUY STATUS: In for the next two issues, as is standard operating procedure, and expecting to enjoy myself more once things get rolling. Thanks for the recommendation cleverly disguised as adamant demands, Rich.

And that should do us. I had intended to cover Flight Explorer, the first attempt by beloved anthology series Flight at an all ages book in depth, but time and general not feeling great conspired against me. Suffice to say you’d be hard pressed to find a better use for ten dollars this week, particularly if you’re in need of a gift for any one interested in comics and old enough to have a pulse. As is apparently now custom, you can find this week’s other books at Expertologist. No idea what the plan is for next week’s column just yet, but if you’ve any recommendations then by all means mention them in the comments or drop a line to chrislamb@gmail.com. See you next time.
Posted by Verge at 11:54 AM