So according to io9, Robin might be the villain of "Batman RIP." 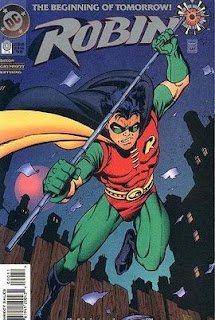 This particular storyline, like most of Grant Morrison's current superhero projects, grabbed me for an issue or so until my eyes glazed over and I gave up, so I have not been picking up on all the "clues."

"As ridiculous as it sounds, there are a couple of clues that point to this being more than just wild speculation. The first is from the end of the previous chapter, where the reader's attention is drawn (by both the Joker and Batman himself) to the colors red and black; this may be pointed towards Jezebel Jet (a black woman with dyed red hair), but it could also be directed towards Robin, whose costume is red and black, and whom, we were told earlier in the chapter, has not been captured like all of Batman's other sidekicks ("Well, little red Robin's proving to be a more... slippery customer than we expected"). We know from upcoming solicitations for Robin's own comic that 2009 will see "an all-new Robin," and the cover of last month's issue of the Robin comic did say that the end was near... But what kind of end is that, exactly...?"

The blog also notes Chuck Dixon's speedy departure from the monthly Robin title -- was it in protest for the Tim Drake's eventual fate, a fate that would in effect undo the writer's years of work on the character?

But I will say for the record that I never liked Tim Drake. Sorry. I've always felt he was a humorless over-achiever, one who could very well be hiding a darker side to his personality. And from a marketing/licensing/business standpoint, Drake is faaaaaar more expendable than Dick Grayson (who's been around for almost 60 years). Both of those factors make such a theory plausible. 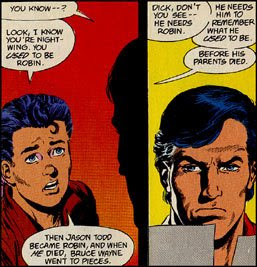 Here's a scenario: taking a page from his own paranoid mentor, Tim could have had a "fail-safe" put in place just in case Bruce went insane and needed to be "taken out." This fail-safe would have been so thorough that Tim himself might have used hypnotic suggestion or some other self-mindfuck to remove all conscious knowledge of the failsafe from his own mind. Of course, I think this is the sort of crazy, controlling shit that Dick Grayson would never have thought of doing. Hence the crucial difference between Dick & Tim. Dick made a good partner for Bruce because he was different from him temperament-wise. But Tim was too similar, and it became a liability.

That said, I have heard no specific rumors pointing in this direction, though it would help explain the Dixon reaction.

And for the numerous Tim Drake fans out there: I'm not saying he's a bad character. I'm just saying after following him since his debut almost 20 years ago, I never warmed up to him. So sue me. 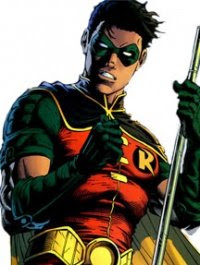 And as for the theory that with Bruce Wayne out of the way, all the Bat-Family has to do is just "move up one" (Dick becomes Batman, Tim becomes Nightwing, Damian becomes Robin, etc.) -- that would just be really pat. Ugh. Whatever happens, I hope that's not the resolution. I hope DC gets their money's worth from Morrison and that the writer thinks up something a little more interesting than that.
Posted by Verge at 9:45 AM