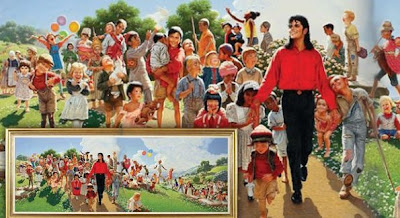 OK, I've had my distance from the whole Michael Jackson thing. I was really shocked and sad that he died; I mean, the road he was going down, it seemed rather inevitable. But it was still a shock.

Watching his memorial on TV, however, brought to mind something that has always puzzled/troubled me. And that's the Balance Sheet Paradox.

For example, I've read a lot of online debates recently regarding whether Jackson's huge contributions to music & extensive philanthropic acts more than "make up" for the facts of his obvious massive narcissism, drug abuse, and, at the very minimum, behavior towards some children that was (if not overtly sexual) sort of really weird. I've even read opinions where Michael Jackson was such a larger-than-life star with such larger-than-life needs and stresses, that if he needed to "blow off some steam" in a number of different ways he should be forgiven for it; that it's the price of us having such an important, world-changing individual in our midst.

Often lost in this balance sheet are individual victims. They are, in the face of the balance sheet, "not really that important." A necessary price to pay for greatness. For example, I've often heard the line of reasoning that compared to all the good President Clinton did, one affair with a White House intern was not a big deal. (In fact, what was that hussy doing, trying to seduce our president, anyhow?) I've heard this argument from not a few women. Monica Lewinsky, in this line of reasoning, was simply "collateral damage."

Another example I remember from my early twenties, as I attended an academic function that was in tribute to a particular teacher. The popular teacher had brought tremendous acclaim and funding to the school, and had performed many charitable acts. He was lionized as a saint, a rockstar, at this party. But I knew that he also was a serial seducer and manipulator of a number of his young female students, leaving them in various states of confusion, distress, shame, etc. This included destroying a marriage, and, in turn, destroying the woman in question's ability to visit her own children.

When I brought this up to my boss, the public relations director of the school, he said he could give me no easy answer about it. He never told me to be quiet about it, because he agreed it was a problem. On the other hand, he pointed out that the school would be severely hit with scandal and misfortune if such a high-profile person was revealed to be abusing his position. I agreed. I loved my school.

I have never seemed to get away from the Balance Sheet paradox. It seems to be something that has always dogged my life, demanding from me some sort of committed stance. Can we have and approve both: the sacred and the profane in the same person, good and bad wrapped up in equal measures? Can we love the good and ignore or condemn the bad? Or are there certain absolutes or lines that, once crossed, stains every other act?

And what about the "collateral damage?"
Posted by Verge at 8:53 AM