Fear And Loathing In San Diego 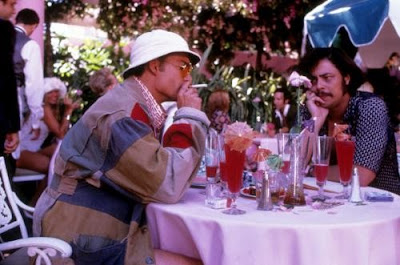 Yesterday was the first time I saw the movie "Fear and Loathing In Las Vegas." I know – it's such a popular movie, it's weird I hadn't seen it yet, right? I did see the other one based on Hunter S. Thompson, "Where the Buffalo Roam," some time ago. Thought that pound-for-pound, Bill Murray did a better job than Johnny Depp in portraying Thompson. It wasn't that Depp's performance was bad; it was just that he was playing it very broad, like slapstick. But all of "Fear and Loathing" was kind of like that: an experience, a mood, more than a narrative. Anyway, my preference for Bill Murray notwithstanding, I liked "Fear and Loathing" a lot.

I started having those "Fear and Loathing In Las Vegas" feelings about San Diego Comic-Con last year, and they were solidifed for me at NYCC this year. I don't think that it was an accurate view of those conventions themselves, as rather where I was at personally in my life at that moment. At that those moments, going into a crowded convention center with all of its colored lights, whistles, salespeople, displays, tables, banners, and endless processions of fans with their T-shirts & their cardboard art tubes slung over their back was too much for me. At SDCC last year I lasted a day before I intensely wanted to go home. At NYCC this year, it was an hour. At MoCCA Art Fest last month, it was 15 minutes.

I had seen it all so many times before; the same tables, the same vendors; the same bars and the same people. The same topics. The same hopes (would they buy the pitch? would Hollywood come a knocking with that option?). But why was I there? What was I selling? And if a big part of selling is selling yourself – who the fuck was I? Seriously. I didn't even know who I was, what my identity was. What did I stand for? A lot of times, people would introduce me as a feminist in the comic book industry. Or I was the girlfriend of that guy. Or I was that author of that ball-busting blog. But if you had to ask me who I was, how I would boil all it down into some inclusive description fit for a Twitter bio, I couldn't tell you.

You know, I write advertising materials for a living. I fit each thing I write to address a certain demographic, mood, and/or lifestyle. And that's the way my life looked like. It was a Microsoft Word template. In all my many examinations of topics on this blog, I never really got to the heart of who I was, or why I was in comics. It was easier to be distracted by a multitude of different tasks and projects. It was easier to fight with the putz of the week. It was easier to go to these conventions, do the same things, eat well, get drunk, go home or to the hotel late, and pass out.

In "Fear and Loathing In Las Vegas," Thompson's goal was to find America, the very heart of it. But watching the movie, I found myself wanting to find Thompson more. And I could not help but feel that the surrealist vision of hell that bedeviled him for the 118 minutes of the film was as much a reflection of his own brain, his own struggles, as it was a portrait of a nation gone sour.

At the same time, it gave me a great idea – sans the drugs, but perhaps including some alcohol and a few cases of "Energy" Vitamin Water – of how I might want to approach the next convention season. Maybe, if I go to enough places, visit enough venues, see enough things, ride enough merry-go-rounds, I can discover America, or Comics, or myself. Or, barring that, at least have a good time and keep the hurling to a minimum.

"And that, I think, was the handle - that sense of inevitable victory over the forces of old and evil. Not in any mean or military sense; we didn't need that. Our energy would simply prevail. We had all the momentum; we were riding the crest of a high and beautiful wave. So now, less than five years later, you can go up on a steep hill in Las Vegas and look west, and with the right kind of eyes you can almost see the high-water mark - that place where the wave finally broke and rolled back."