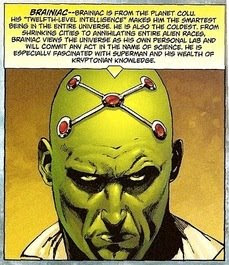 The Ebert just won't let it go, will he?

In his latest column, "I'm A Proud Brainiac!" (complete with graphic of the DC Comics "Brainiac"), film critic Roger Ebert defends his stance on Transformers 2, among other things:

"Those who think "Transformers" is a great or even a good film are, may I tactfully suggest, not sufficiently evolved."

"So let's focus on those who seriously believe "Transformers" is one of the year's best films. Are these people wrong? Yes."

"Some of the posters at certain popular web forums are nine blooms short of a bouquet."

"But am I out of touch? It's not a critic's job to reflect box office taste. The job is to describe my reaction to a film, to account for it, and evoke it for others. The job of the reader is not to find his opinion applauded or seconded, but to evaluate another opinion against his own."
Posted by Verge at 9:49 AM