If Comics Don't Change, They "Could Be Dead In 18 Months" 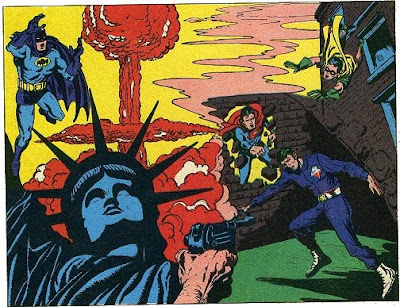 Devin Faraci from the website CHUD has written a article that I find particularly shattering. Granted -- he is really "a movie guy," not "a comic guy," so some may find his opinions a case of "the outside looking in." But as a former comic collector, and especially as an outside observer, I think Faraci's apocalyptic prognosis for traditional comics bears a look.

Faraci basically believes that "the new depression may be the best thing that ever happened to comics." He predicts the death of the "superhero," and gladly welcomes it. He accuses the mainstream comic companies of catering too much to the hardcore fans -- especially by pushing said superhero genre -- and not doing enough to encourage readers outside the "clique." And he feels that the 22-page floppy format, with its relatively hefty $4.00 price tag, is too much for people to pay for in this economy.

He ends the piece with this stark prediction for the future of the medium and the business:

"When Marvel and DC fall (and for me it's when, not if. I guarantee to you that ten years from now the idea of going to a comic shop to buy part 17 of a universe-spanning crossover event will seem as bizarre to readers as it would be for readers today to go to a grocery store to pick up Night Nurse), the world of comic books is going to be in serious disarray. Local shops that haven't already branched out into geek interests beyond comics will be destroyed almost overnight; hybrid stores that offer everything from video games to baseball cards and maybe have a social element - coffee shop for instance - will be left standing, but barely. Spider-Man will go on to star in five more movies, and there will be some sort of comic tie-in for them, but that'll be tertiary marketing. The Big Two will still be publishing something, but it won't be monthly pamphlets in the way we know them today - maybe we'll get endless reprint trades and occasional new graphic novels.

The comic world will seem like a wasteland for a while, but those independent mammals will have positioned themselves perfectly for the next phase. I don't think these books will become suddenly profitable overnight; I know that many creators struggle to make ends meet while producing their books. That won't change. People will still have day jobs and will write and draw on the side. But suddenly, without the superhero choking everything, these books will find the opportunity to grow. The artistic drive that makes people want to tell stories will continue, and a new economic model for these books will be created - hell, it's already being created. And I don't think that this means comic books will suddenly become an endless series of stories about being abused by your dad or about having no luck with girls; there will be adventure and science fiction and horror and romance. Getting into writing and drawing mainstream comics today is like being in a cover band - you want to do your version of Aquaman. When the superhero dies, it's going to be like being in a garage band. You do it because you love it, because you have songs to sing. And maybe somebody will take notice and you'll make some bucks off it."

Finally, Faraci says that if the mainstream comic book industry doesn't radically change its focus and methodology, they "could be dead in 18 months."

What do you think? Is he full of it? Or is he on to something?