The Comic Where Mary Marvel Got Sexually Harassed 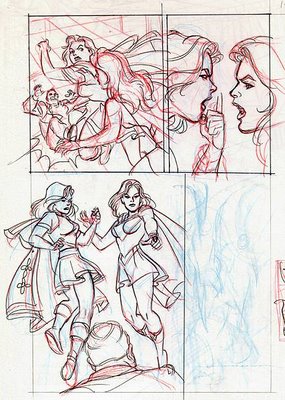 The Comic Where Mary Marvel Got Sexually Harassed

I turn now to "Perceptions," a story written by Peter David that was published in "Supergirl Plus #1." In it, Mary Marvel gets sexually harassed by middle-aged divorcee cop Lenny O'Hara. However, the way David presents the story, things are open for interpretation, like the old optical illusion that could be seen as either an old lady or a baby.

Of course, during the course of the story Mary (this is before her "stupidification" by my otherwise fave writer Keith Giffen in "Formerly Known As the JLA") has a jones to kick this guy in the nuts, with Supergirl having to talk her out of it. The story ends with everybody deciding to take the case through the proper channels, and O'Hara pleading innocence right up to the very last scene, where he kind of gets shaky and says something like "I couldn't have done that...c-could I?"

Unlike robbery or murder or other crimes, it's very hard, unless you have witnesses, to present a clear-cut case for sexual harassment. It all boils down to the situation in "Perceptions," with Mary saying he did it, and O'Hara saying he didn't do it. The ultimate answer may lie with either party or (as presented in the story) somewhere between the panels. Only God and the two parties know for sure -- the rest of us can only choose a side or make inferences based on indirect data.

I feel the person who has gone through this or other traumas definitely has the right to tell her (or his) story -- that it's part of the healing process and provides people going through similar situations with perspective & hope. Further, I think the topic of sexual harassment itself should be debated and examined thoroughly on message boards and forums everywhere.

But one thing that gets lost in the internet debate and gossip is just how goddamn sad sexual harassment situations are for everybody involved. They're fucking sad. There are no winners and losers. Everybody is a loser. Feelings on both sides are filled with agony and resentment and hurt. You have one side saying "nothing happened and you're liar" and the other side saying "I'm really really hurt" and it's like Iraq, there's no immediate clean way to resolve it. And then you have people caught in the middle who are pressured to take sides and it's shitty for them too.

But what are the solutions? How do we define "sexual harassment"? What precautions need to be in place in order to nip it in the bud before it festers into a civic Hiroshima?

I always thought I had a pretty thick skin about these matters. I gave my co-workers a "get out of jail free" card to say something stupid. It was my observation that about 30% of these men, even the nicest ones, even married ones, would say once and only once some really inappropriate thing. They would just blurt it out something like "I'll bet you'd look good in those Black Canary fishnets." Then I would just blink a couple of times like I didn't know what they were talking about, they never brought it up again, and a harmonious working relationship followed. I'm serious, this worked like 90% of the time.

I'm not here to "sell" the "get out of jail free card" approach to all of this. Some women would laugh off the Black Canary comment, and some would sue -- there's a spectrum.

On the other hand, clear guidelines set by management might have even precluded the need for the "get out of jail free card" scenario. Such guidelines protect not only the target but the aggressor, providing boundaries.

But then other people would say such strict guidelines would take all the "spontenaiety" out of the workplace, that it creates an antiseptic PC "fantasy world."

And then what about the guy who wonders if complimenting a blouse is sexual harassment? Is "nice hair" okay and "nice legs" forbidden?

What about a situation where co-workers are having sex with each other and things go south? Or a boss and an employee? Or an artist and an editor? How are those cases judged differently?

What about a Britney Spears photo-manip on a work screensaver?

What about the drunk co-worker who humps your leg at a company function? Is this a case for the courts? Or should one simply get "Mary Marvel" on his ass?

Hey, if everybody would just respect everybody else and follow the rules we learned in Star Trek:

Spock: "Sexual harassment is not logical."
Kirk: "Uh..."
Sulu: "Do my actions while under the influence of alien viral LSD or conducted by my mirror persona count?"
Data: "I am not programmed to sexually harass."
Riker: "Baby, there's no need for me to sexually harass anyone -- I'm HOT."
Worf: "In our mating rituals the males stalk the females on horses and try to subdue them with long, clublike instruments...I believe you humans have a similar ritual, called 'polo.'"
O'Brien: "Well...why do you think I was really transferred to 'Deep Space Nine?'"

Anyhow, I'm not here to give any hard-and-fast answers -- I'm just throwing questions out on the table. I heartily encourage debate and dialogue on the subject, on the "comments" section of ths blog and anyplace else.

And I was kidding about O'Brien. I don't really know why he was transferred to Deep Space Nine.
Posted by Verge at 9:13 PM