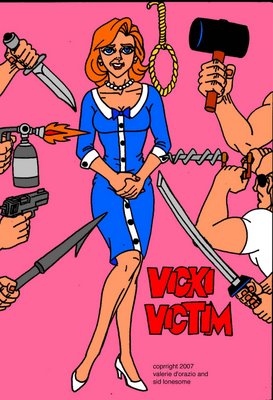 Me and a good pal Sid Lonesome are working on some art depicting the denizens of the Gilgongo! Universe, and figured Vicki was a good place to start.

As you can see, Vicki is a valuable and innovative contribution to the pantheon of female comic characters. Virginal and accomodating, Vicki is the civilian liaison to the Heroes Club and has even been known to decorate their banquet hall with paper cutouts for Thanksgiving. While it is tough work being the official victim of the Gilgongo! universe, the dental plan is good.

Soon we'll have the whole gang:
"The Shnell" -- the fastest hippie in the universe
"The Thickness" -- nigh invulnerable but has rickets
"Cryin' Jack" -- manic-depressive World War II ace
"Uber Girl" -- it's tough being a teenager, genetically superior, and sort of a fascist

Not sure what we're going to do with these babies yet, but...it's comics, dude! Yeah!
Posted by Verge at 1:01 PM